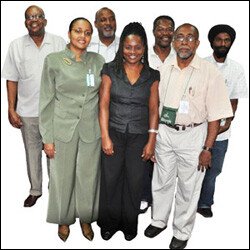 Government To Establish Tribunal Board

The concept of Unemployment Benefits is under consideration by the St. Christopher and Nevis Social Security Board.

A former Labour Party Administration, under the leadership of Premier and First National Hero, the Right Excellent Sir Robert L. Bradshaw, introduced the National Provident Fund in 1968; and upgraded to the Social Security Scheme in 1978, 10 years later by the Bradshaw Government.

Mr. Bailey said changes have been made from time to time that were designed to improve the system.

“First there was the conversion from National Provident Fund (established in 1968) to a defined benefit, pay-as-you go, partially funded system in 1978. Then in 1986, Employment Injury coverage was introduced to provide workplace insurance. Ten years later, in 1996, coverage for Self Employed persons was introduced. Now, in 2009, two new concepts are being considered, one of which is the establishment of an Unemployment Benefit and the other is the Appeals Tribunal,” said Mr. Bailey.

He pointed out that the Social Security Act No. 13 of 1977 actually makes provision for an Appeals Tribunal, and Statutory Rules and Orders (SR&O) No. 22 of 1978 provide details on the Tribunal.

“This is a body that will deal with reserve questions, i.e. questions that arise on the contributions side of Social Security and from the benefits side as well. As an example, on the contribution side, some issues, with the changing times, have become blurred; and some definitions have changed with time – what is work (now that persons are earning an income while staying at home), and who is an employed person vs. who is a self employed person? On the benefits side of Social Security, the Tribunal is empowered to review any decision made by the institution which leaves the claimant feeling aggrieved,” said the Assistant Director.

He disclosed that the Tribunal, when it sits, will have a Chairman, who must be a lawyer with at least five (5) years of experience, and who will hold office for a renewable two-year term.

That Chairman will be a Government selectee, and will be joined by an employee representative and an employer representative to form a three-person commission, consistent with the tripartite composition of the Social Security Board. The employee and employer representative who sits on a particular case may vary, but must be from pre-approved panels nominated by the labour union(s) and the Chamber of Industry and Commerce respectively. All members and alternates will be trained in arbitration, and ought to be familiar with relevant legislation. The concept of the panel is important in that it allows an aggrieved insured person the right to identify a preferred member to hear a case.  Furthermore, the regulation is gender sensitive: by law there must be female membership on the Tribunal.

An aggrieved person may choose any three persons to hear his/her case, provided that the persons chosen represent Government, employer and employee. In other words, some members are alternate to others, and some members are mutually exclusive of others.

A sitting of the Appeals Tribunal may be activated when an aggrieved Insured Person appeals to the Director against a Social Security decision within 21 days after the decision is given, and must be done in writing, stating the grounds on which the review is being sought.

Mr. Bailey said that the establishment of the Appeals Tribunal has been long in coming. “There were at least two attempts made whereby a Chairman was actually appointed each time, but due to a number of issues, the process was not completed. However, the regulations and amendments were recently completed that would give full effect and powers to the body and we are moving expeditiously to establish the body,” he disclosed.

In calling for the Appeals Tribunal to be used wisely, Mr. Bailey pointed out for the record that persons who claim to be wronged because of the deduction of the mandatory and statutory money from their pay package do not have a case to put before the Appeals Tribunal.