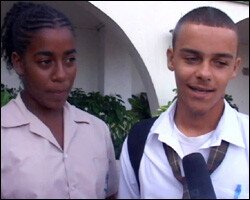 Youth in St. Kitts weighed in quite emphatically on a number of issues at a National Council for Human and Social Development (COHSOD) consultation held at the conference room of the Ocean Terrace Inn, on Tuesday, November 17.

The COHSOD was held as a final consultation to inform the regional report of the CARICOM Commission on Youth Development (CCYD), which was created by Heads of Governments to capture the dreams, aspirations and concerns of young people in member states.

At the start of the session, Deputy Prime Minister Condor described youth development as “the most pressing and urgent issue concerning St. Kitts and Nevis and the entire region.” He called on participants to be completely honest and open during the consultation.

The young people accepted the challenge and a passionate debate ensued on the CARICOM Single Market and Economy (CSME), youth advocacy and employment opportunities for university graduates.

“The format was good. The discussion was very productive and [was] a positive one,” Patrick Walters of the Washington Archibald High School told SKNIS. Mervann Thompson of Verchilds High agreed and added that the youth population will be greatly served by the exercise. Basseterre High student Desi Brown said that “it was amazing to see that young people have so much potential and don’t use [existing opportunities] to their advantage.”

The participants called for the timely conclusion and implementation of the recommendations of the CCYD which was launched in March 2007, following a mandate of the CARICOM Heads of Government meeting in Suriname in 2006.

Ms. Brown challenged her peers to change their attitude and get involved in youth advocacy which generates activities like the national COHSOD, while Mr. Walters asked organizers for greater feedback as consultations are being held region-wide.

Dr. Greene responded that the CARICOM Secretariat will publish a shorter, youth-friendly version of the report highlighting the outcomes. This will be distributed to all member states to share with participants and others. The full report which contains well over 150 pages will be posted on the CARICOM website after being officially presented to Heads of Government in a summit slated for January 2010.