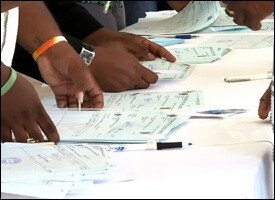 Treasurer in the Nevis Island Administration Mr. Colin Dore, placed the total sum of severance pay benefits to ex Four Seasons Resort workers at over EC$7million with the single largest payout of over $75,000.

Mr. Dore told the Department of Information on Wednesday more than three quarters of the 564 workers who had qualified for the Federal payments, had already received their severance benefit.

The Labour Departments on both St. Kitts and Nevis, in collaboration with Treasury staff on both islands began handing out disbursements to the workers on Monday at the Charlestown Secondary School.

According to Mr. Dore, though there were a few hiccups with regard to spelling errors in surnames and one or two instances where the Social Security numbers did not match with that on the cheque.

The Treasurer noted that the distribution process had gone without incident and was of the view that the presence of the Labour Department representative from St. Kitts who was on hand to explain to those persons who didn’t qualify the reason why and to respond to any queries facilitated a smooth and quick process.

“I think that in a way calmed the crowd since any questions they had could have been answered on the spot and we are quite happy for that,” he said.

He also explained that the Social Security numbers were used as a guide since several persons who had worked at the Four Seasons Resort, Nevis, carried the same names and surnames.

Ms. Jennifer Archibald who oversees severance payments at the Department of Labour St. Kitts explained that the 50 persons who did not qualify from the 614 persons who had applied for severance from the Four Seasons, did not fall within the provisions made under the Protection of Employment Act.

“Once you have worked for 52 weeks preceding that date of termination of employment, you can claim for severance and will qualify once there aren’t any breaks or gaps in the year or years of service.

“According to the Protection of Employment Act, a person who has a break in service for three months or more would not qualify or that person’s years prior to that break would be disregarded in the computation of severance pay,” she said.

Meantime, one former employee Mr. Sylvester Pemberton who received severance benefits expressed his gratitude to the Nevis Island Administration who had collaborated with the federal Government to resolve the matter in quick time.

“We were out of work for a period of time and we received the money in good time. We have to give thanks for good governance.

“The last time we were laid off most of the workers went back to work without their pay and now we get pay in due time so we are very thankful for the good governance of the Nevis Reformation Party and to the Labour Departments both in St. Kitts and Nevis for the tiresome work they have done to make us happy,” he said.