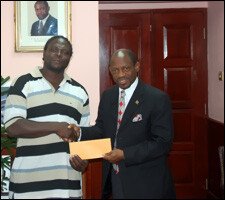 “We were scheduled to perform during the Calypso Show but the show started late and it was pulled from the programme,” said Wilkin.

Wilkin expressed thanks to St. Kitts and Nevis Prime Minister Hon. Dr. Denzil L. Douglas for making a financial contribution towards the trip to Antigua.

“His contribution has helped us to keep this cultural art form and string band music alive not only for St. Kitts and Nevis but further afield,” said Wilkin.

The Stinging Ants Clown Troupe is the former Eagle Squadron.