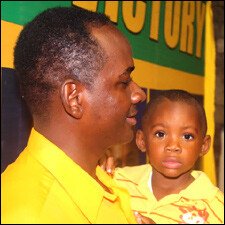 People’s Action Movement Constituency Seven Represenntative Ronald Louis Williams, in a fiery message delivered on Saturday night to voters, spoke of his experience in which persons working close to the Labour Party attempted to draw him into a confrontation. He said that he had reported the matter to the police and to date nothing has been done.

“I was driving past my constituency office when my vehicle was blocked (name of person given) and I tried to reverse and they blocked me again, calling out for confrontation. But being the person that I am, I sought to divert into a different direction,” Williams said.

Williams stressed that he is appalled by the manner in which operatives of the Labour Party are conducting themselves, noting that several of his posters were torn down in full view. He said that he has no intention of returning to the police, declaring that “enough is enough”.

“Supporters, I have no intentions of returning to the police station, as I have decided that if my posters cannot remain up then no one else own will remain. If they want tit for tat then I am ready. If we cannot have fair play then there will be no play at all, as elections should be of issues and not these foolishness that persons are using in an attempt to garner votes,” Williams declared.

He added that the Parliamentary representative for Constituency Seven, Dr. Timothy Harris, has also sought to verbally attack his wife and children, stressing that his family should be left out of the election campaign.

“I have not sought to attack anyone for Dr, Harris and, therefore, think that he should leave my family alone as I don’t think that he wants to go down that road,” Williams declared.

Williams urged his supporters to remain patient but vigilant, noting that while the there would be instances of the persons attempting to draw them into confrontation, they should employ every possible means of restraint.