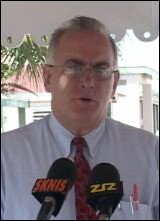 Dwyer Astaphan Speaks Out Against Labour

St. Kitts – Nevis Prime Minister, Dr. Denzil Douglas was on Monday 11th January, 2010, condemned by one of his fellow Labour parliamentarians, as a man who is unfit to continue to serve the twin-island federation as head of government.

This scathing attack came not from the opposition party, but one of Douglas’ own Labour colleagues, Dwyer Astaphan, who has held some of the most senior portfolios in the Cabinet, including Minister of National Security and Tourism.

Astaphan, who was one of the most influential and powerful Labour Parliamentarians, serving with Douglas, told thousands of listeners during a half hour address on one of the local radio stations in St. Kitts, that Change is Necessary and that he did not believe that Dr. Douglas was the right man to lead St. Kitts & Nevis in the future.

Astaphan further stated that, it is only when that change comes, would the nation be able to heal from the current turmoil dividing the country.

The Labour MP expressed the sentiment that the upcoming elections will be one that will be keenly scrutinized by the historians and viewed with much hope and interest by our children.

Astaphan said that “The Caribbean is watching. The world is watching. And the historians are waiting with their pens and laptops at the ready to hail or condemn us”.

He declared that he was still a staunch supporter of the principles of the labour movement but maintained his desire to see a CHANGE in the direction and leadership of the party and a firm willingness to respect a new PAM government.

“If the people of this country elect PAM to office I would be among the first to respect and acknowledge the new government,” the Labour Parliamentarian continued.

In 2009, just before it was widely felt that new elections would be announced, Astaphan resigned from the Douglas Cabinet, accusing the Prime Minister of being a dictator and a man all for himself and not for the good that he can do for the nation.

He also cited among other things, the lack of proper leadership of the Labour Party and the country by Prime Minister Dr. Denzil Douglas.

Astaphan said that he has always maintained his support of the principles of the Labour Party, but has expressed grave concerns over the leadership and direction of the party which he feels has strayed significantly from the principles of which he supports.

The labour party replaced Astaphan with Ms. Marcella Liburd who would be challenging PAM candidate Roy Angus Fleming in what many political observers have considered to be a pick-up seat, to be re-taken by the opposition Peoples Action Movement, PAM, led by Lawyer Lindsay Grant.

Mr. Fleming’s party, PAM has been running a strong campaign for change, highlighting critical issues of Crime, Cost of Living and Corruption.

Recent polls in 2009 have all indicated that the new labour candidate Marcella Liburd, is trailing the PAM candidate Roy Fleming in what is the federation’s largest constituency.

In his 30 minute long address, Astaphan outlined his political journey which began back in 1992. He spoke about the hope of a unification of the political parties for the overall good of the nation.