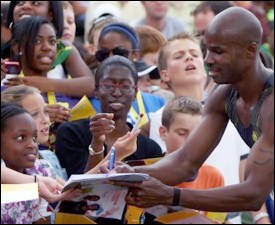 2003 World Champion Kim Collins proved that he still has something left in his small lightening fast frame. The 34 year old blitzed to a victory in the Moscow Open held in the Russian capital city on Sunday.

Premilinary results showed that The Caribbean sprint icon clocked the identical time as American Joshua Nornan. However Norman was disqualified leaving Collins as the clear winner.

Collins announced his retirement from World Athletics in 2009 but has made limited appearances at various meets such as the Moscow Open since then. He placed 4th  in the 200m sprints at the Aviva International in Glasgow, Scotland last weekend

The Kittitian Hero will be staging his first Track and Field  camp this April in St.Kitts under the theme “Sharing to Achieve Greatness”.

The camp will feature Collins, world class coaches and athletes providing valuable knowledge to over 100 children and their individual coaches, so that they can aspire towards greatness in this field.

Every aspect of Track and Field would be covered in great detail, including sessions in proper warming up and cooling down exercises, dangers of drugs and alcohol in sports, the life of being a student athlete, tips on becoming a professional athlete, weight and strength training, proper nutrition of athletes, baton passing and making a school’s sports day more exciting, and a bigger revenue earner.

The initiative is open to children who are interested in sprints, hurdles, jumps, throws, pole vault, among other disciplines, and they will be instructed in fun and creative ways while participating.

All of the facilitators will be renowned individuals who have graced the world’s athletics stage and have extensive experience in summer camps for children.

The goal of the camp is to identify athletes who possess the potential and strong love for the sport and assist them as they develop into champions, both on and off the track.

Collins is expected to make a few more appearances on the European track circuit before returning home to finalise preparations for his first Camp.