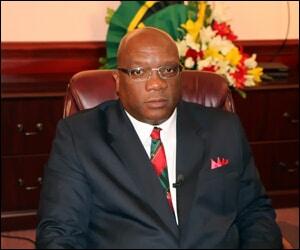 In his New Year’s Day message, Prime Minister Dr. the Honourable Timothy Harris announced and congratulated the four New Year awardees who were bestowed with the prestigious honors consented to by Her Majesty Queen Elizabeth II.

“The members and friends of the Mount Carmel Baptist Church are smiling at this well-deserved honor bestowed on Bishop Jones,” Dr. Harris said.

Mrs. Ruperta Richards-Leader was trained as a nurse in the United Kingdom (UK). She served on a number of Nursing Education Boards in the UK and is the owner of the Grange Nursing Home and Health Care Facility in Ottley’s Village.

Ms. Clarita Richards has served as a long-standing public servant. She has worked in Foreign affairs in the diplomatic service at the High Commission in London; she has been the organist and choir director at the Zion Moravian Church for many years; she also taught Modern Languages. She retired as a Permanent Secretary in the Office of the Prime Minister in the People’s Action Movement (PAM) Administration.

Mr. Keith Scarborough is a cultural icon in Nevis. Known in the Calypso arena as King “Dis N Dat”, Mr. Scarborough won the coveted Culturama Calypso title for ten years. He has represented Nevis in several regional and international calypso forums. He has also ran for representational politics for the St. Thomas constituency in Nevis on the Concerned Citizen’s Movement (CCM) ticket and also served as Cricket Chief in Nevis.

“On behalf of the Government of St. Kitts and Nevis, I also salute them for their sterling national service which has resulted in the royal recognition now being bestowed on them.  We trust that the example and legacy of all awardees will serve as a model for our younger generations to emulate,” Prime Minister Harris said in congratulating the awardees.