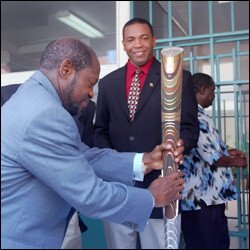 PM Douglas With The Queen’s Baton
Photo By Erasmus Williams

Accompanied by a local folklore masquerade group, the Prime Minister of St. Kitts and Nevis, Hon. Dr. Denzil L. Douglas received the Queen’s Baton as the count-down continues to the XIX Commonwealth Games to be held in Delhi, India.

“The Commonwealth Games is dear to the hearts of Kittitians and Nevisians, as we remember the wonderful achievement of our own outstanding athlete Kim Collins, when he took the Gold Medal in the 100 meters in 2002,” said Prime Minister Douglas after accepting the baton from Kittitian commonwealth bronze medalist, Jason  Rogers.

“With the arrival of the baton in the Federation, we dare to dream of what would be achieved by our own athletes in the future, who are already along the journey toward top personal achievements and the representation of a very proud and determined people and nation. The Commonwealth Games have been a wonderful event that has brought the member countries of the Commonwealth to better levels of understanding and cooperation, and the element of sport does it much better than any other set of influences,” he told a gathering on the steps of Government Headquarters.

Dr. Douglas said that as the baton moves through the streets of St. Kitts and Nevis, “it is my hope that our people, particularly our young people, would find in this occasion the inspiration to strive for excellence, to work diligently knowing that effort, consistency and persistency are required for success in sport and every aspect of one’s personal life.”