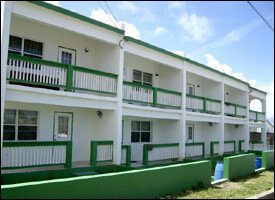 A study conducted by the Barbados-based Caribbean Development Bank said poor quality housing in St. Kitts has been slashed by a whopping 23 percent in the past 8 years.

The study noted that in 2000, some 30.5 percent of the population could be described as living in poor quality housing and by 2007/2008 this had been slashed to some 7.5 percent.

“Very good news,” said Prime Minister Hon. Denzil L. Douglas, whose Labour Administration has constructed over 2,500 affordable and middle-income homes. Some 800 homes are currently being constructed, renovated or expanded under three separate projects supervised by the National Housing Corporation. The former PAM Administration built less than 250 homes in their 15 years in office.

“St. Kitts is moving in the right direction,” said Dr. Douglas on Tuesday during his weekly radio programme “Ask the Prime Minister.

“These Bank statistics show that St. Kitts has not only been changing, but it has been changing for the better under my St. Kitts-Nevis Labour Government,” said the Prime Minister, adding:

“We are pleased with these results. What I want to stress is that my government is committed to continuing along this positive path ““ serious, committed, and energized.”