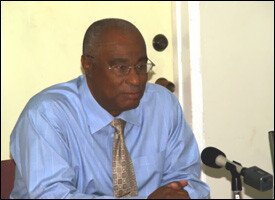 The Nevis Island Administration is doing everything in its power to alleviate the stress of these economically challenged times. Premier of Nevis, the Hon. Joseph Parry spoke of his government’s intervention in assisting the laid off employees of the Four Seasons Resort, at a Town Hall Meeting in Charlestown last Tuesday.

He noted that very early, the government held meetings with the banks and business places , to offer new refinancing plans or sympathy arrangements to accommodate the affected Four Seasons Resort workers.

During the Town Hall Meeting the Premier emphasized that it is very important for the affected workers to go to the banks or business places, to make arrangements and work out new re-payment plans, which would greatly ease their ability to continue to meet their financial obligations.

On the subject of the re-opening of the hotel, Premier Parry said, “The business of the government is to make sure that the hotel is reopened as quickly as possible, by meeting with lenders and continuing to have pro-active meetings with Four Seasons Resort owners and representatives.”

He added that the Four Seasons Resort hoped to be reopened by the end of the year. A representative appointed by the Hotel to oversee the reconstruction works said a number of Nevisians, including women, would be employed.

The Premier stated that the Four Seasons reconstruction representative said he was very satisfied to see the work done by females in the cleanup of the hotel after the passage of Hurricane Omar.

Premier Parry also indicated that the Four Seasons Resort plans to hire a number of unskilled Nevisian workers as there will be a need for some of the personnel to work during odd hours.

“Some workers during the reconstruction stage must understand that they are going to have  days when they will have to work 7:00 pm- 6:00 am or other night shifts. I ask that Nevisian workers make the sacrifice, make the money for themselves and restore the hotel as quickly as possible,” he said.