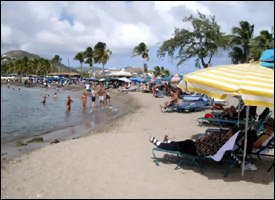 Cruise tourism stakeholders in St. Kitts can look forward to better days ahead as ships of the Princess Cruises Line are expected to bring thousands of passengers to the island over the next two seasons.

The Emerald Princess, Grand Princess and Sea Princess will make a combined total of 50 visits between September 2010 and April 2011.

The 113,000 ton Caribbean Princess, which has a passenger capacity of 3,100 passengers and 1200 crew offers  a one eight-day Bermuda & Eastern Caribbean sailing from New York to San Juan calling at Bermuda, St. Kitts, Antigua and St. Thomas, departing October 24, 2009.