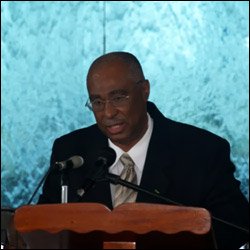 Premier of Nevis and Minister of Finance in the Nevis Island Administration, the Hon. Joseph Parry presented his third budget address to the citizens of Nevis, at the Nevis Island Assembly Chambers in Charlestown on Tuesday.

Addressing the packed gallery of persons from the islands private and public sector and students of the Charlestown Sixth Form College, the Minister of Finance stated, that the island of Nevis has progressed under the leadership of the Nevis Reformation Party Government.

He explained that spending on capital projects is imperative for any developing country to stimulate growth. Premier Parry went on to say, “It is with this in mind, that this government has pursued the extensive renovation of roads and water development since being elected in 2006. However, due to the gloomy global economic outlook for the next fiscal year we would have to consolidate our fiscal position by more tightly controlling capital and current expenditure.”

On Financing, the 2009 Budget, revenue generation and collection is of vital importance to the performance of the Nevis Island Administration. The level of taxes imposed on the country is also a critical determinant of the level of investment and saving that will take place in the economy.

The Ministry of Finance is expected to raise $104,635,000 in current revenue for the period, signifying an increase of $6,313,600 over the estimation of 2008. The major indirect tax classifications within the department are all expected to increase. These include Import Duties, Consumption Tax and Customs Service Charge.

The Inland Revenue Department is also expected to witness increases in their tax collection. The estimated tax collection for this department was $48,018,100 in 2008 whereas it is projected at $50,919,000 in 2009. Direct taxes such as Corporate Income Tax and Social Services Levy are projected to increase by as much as 18.65%, while the indirect tax of Stamp Duty is expected to increase due to the construction of Villas on the island. Meanwhile, the reduction in tourist activity will cause a corresponding reduction in the collection of Hotel and Restaurant Tax.

The third most important arm of revenue collection within the Ministry of Finance is the Financial Services Department.  This department is expected to raise $14,588,000 in current revenue for the period. The projected revenue has increased by a nominal 2.79% over that of 2008.

Premier Parry also pointed to an area of concern; the global financial and economic crisis which threatens to derail the gains made in wealth creation and poverty alleviation over the last decade.

“The budget presented must reflect the reality of the world in which we live and thus we have decided to more tightly control both current and capital expenditure and to be conservative in our revenue projections.  I therefore call on the people of Nevis to more effectively manage their finances and save!”

Under the 2009 budget, the Finance Minister outlined the various Ministries which received major increases in expenditure allocations these are as follows: Legislature,  Legal, Audit,   Premier’s Ministry, Ministry of Finance, Statistics and Economic Planning, Ministry of Agriculture, Ministry of Health. Ministry of Tourism, Ministry of Education, Human Resources, Ministry of Social Development, Ministry of Trade, Industry and Consumer Affairs.