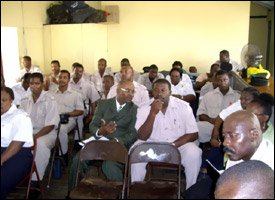 Minister of National Security, Prime Minister Hon. Dr. Denzil L. Douglas said that the concerns of prison officers are genuine and changes that they have suggested will be made.

Dr. Douglas told the prison officers when he met with them on Wednesday that they are performing a significant role in maintain law and order in the society.

“You are an integral part of the National Security interest of St. Kitts and Nevis and you have a critical role to play in the keeping this federation safe and secure,” Prime Minister Douglas said during a meeting with the officers at Her Majesty’s Prison.

Prime Minister Douglas, who assumed the portfolio of national security recently, spoke of the importance of collaboration, discussion and information haring from the prison management which will help new recruits to discharge their duties with the confidence, care and attention in accordance with the law.

He pointed to the overcrowded situation at the prison which he said is a concern to him as Minister of National Security and Prime Minister.

“It is also a concern of the wider society, the visiting justices, the families of prisoners who are held here and my government is seriously trying to correct this situation,” said Prime Minister Douglas, who disclosed that he held discussions last week with several persons aimed at improving the prison system.

He said he is aware of the serious challenges prison officers face and spoke of the efforts to ensure that their working environment as well as their conditions of service is improved.

“The system must provide opportunities and if there are shortcomings from management, the administration, or at the ministerial level I would like to know,” said Dr. Douglas who fielded questions and heard the concerns of officers before the conclusion of the meeting.