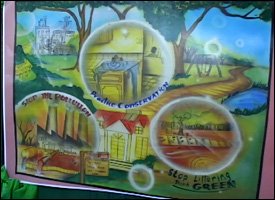 Care and protection of the environment were foremost in the thoughts of 27 students when they made submissions to the local Florida Caribbean Cruise Association (FCCA) Poster Competition this year.

This is the objective of the annual contest geared towards youth who must depict at least three ways in which their destinations can make a difference in preserving the environment.

The winners of this year’s competition were Dedron Griffin of the Basseterre High School who won in the senior category and Denicia Phipps of Irish Town Primary who won in the Junior category.  Both posters would be forwarded to the FCCA to be submitted as entries for the regional competition.

Permanent Secretary in the Ministry of Tourism Lloyd Lazar emphasized that all who took part in the competition were winners in their own right, particularly, considering that the tourism product had been promoted.  Speaking on behalf of the Tourism Authority who coordinated the local event, he noted that tourism should be recognized as the engine of growth of the economy.  He said that the students should not be satisfied with environmental awareness but should also be prepared to become leaders and active participants in that aspect of the Federation’s development.

Mr. Lazar congratulated the winners and all participants on behalf of the Prime Minister Honourable Dr. Denzil Douglas who is also minister of tourism and Honourable Richard Skerritt who is the Minister of State responsible for Tourism.

The judges of the competition were local artists Ms. Hazel Brookes, Dennis Richards and Barbara Kassab.  Assistant Art Coordinator Ms. Deslyn Richards presented remarks submitted by Ms. Brookes.  She wrote that posters should be eye-catching with intense colours while the quality of application should be neat and tidy.  It was further noted that there should be clarity of content.  Ms. Brookes stated that even before entering future competitions participants should conduct research on the topic and look at the different global art forms without dismissing different and unique methods.  FCCA participants were judged in the categories of description, analysis, interpretation, judgement/evaluation.

An Essay Competition which takes place in July is another environmental awareness activity of the FCCA.