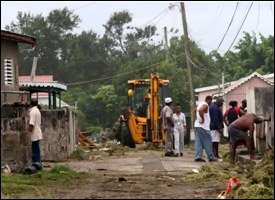 Prime Minister Douglas is expected to be joined on the tour by the Premier of Nevis, Hon. Joseph Parry and other officials of the Nevis Island Administration.

He is expected to look at the damage to the homes in Low Street in Charlestown, the Four Seasons Hotel and the western coast line along Gallows Bay.

Prime Minister Douglas and Premier have been in consultation with each other prior to and after the hurricane which affected both islands of the Federation.