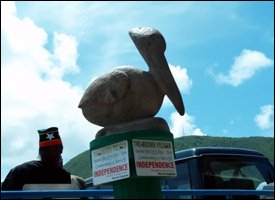 Premier of Nevis and Minister of Tourism, the Honourable Joseph Parry,  commended Nevisian sculptor, Mr. Marvin Chapman for his recent donation of a stone statue of the Brown Pelican to the Nevis Airport.

The Brown Pelican is the National bird of St.Kitts and Nevis.

Mr. Chapman, clad in patriotic dress for the occasion, said he was moved to make this donation to the people of Nevis because, as he puts it: “We have a lot of talent in Nevis and I want to display my work for the world to see. It is also my mission to add character and beautification to the Nevis Airport with the stone sculpture.”

At the presentation, the Permanent Secretary in the Ministry of Tourism, Mr. Tyrone O’Flaherty declared that because of Mr. Chapman’s consistently brilliant work in the field of art and craft, he will be given first preference for a stand at the new artisans’ village that will be established at Old Hospital Road by early next year.

At the conclusion of the brief handing over ceremony, Premier Parry said that he was extremely pleased with Mr. Chapman’s work and that he hoped that the young sculptor can mentor and teach other young people about the art of sculpting.

“When one talks about art and sculptures, people usually think about Africa, Haiti or Italy.  Yes, Nevis is small but the island can someday be recognized as a place for talented sculpturing and skilled artists,” said Mr. Chapman.

Also on hand to witness the handing-over were other government officials, airport personnel and members of the general public.