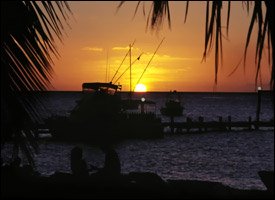 Well I at last got hold of the GM (Vaden Jones), at Oualie Beach Hotel in Nevis.  The good news is that the Oualie Beach Hotel itself suffered almost no damage from Omar, with the exception of some downed limbs, and LOTS of seaweed on the beach.  The plus side of all of the seaweed on the beach though is that the wave action added more beach to Oualie!

Now for the bad news, the pier that you see in the above photos, was literally cut in half by the runaway ferry Seabridge.  No worries though, the front part is still intact, and they are working on rebuilding the pier.  So basically after a good clean of the beach, Oualie was back to normal in just a couple of days.

For the rest of the hotels on Nevis, this is what I have learned from my friends in Nevis.

Nisbet Plantation: Seaweed on the beach and downed limbs

So it looks as the only hotel that sustained any major damage was The Four Seasons Resort.