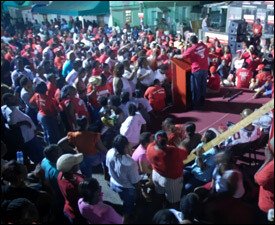 Dr. Douglas said that the stalling tactics of the opposition People’s Action Movement (PAM) to delay the calling of elections by filing two injunctions against the Governor General, the Attorney General, the Constituencies Boundaries Commission, the Electoral Commission and the Supervisor of Elections, is an indication that the opposition is not ready.

“This election is about your continued empowerment. It is to continue the vision for each family in St. Kitts and Nevis to live in their own home. We prefer families to be paying mortgages to own their own home or paying the building company for materials to own their own homes than to be paying rent,” said Dr. Douglas, who noted that since taking office in July 1995, his St. Kitts-Nevis Labour Party Administration, under various programmes has built over 3,000 homes. On Sunday Prime Minister Douglas announced that the Civil Service Home Mortgage Scheme introduced in 2004 has housed 341 families to the tune of EC$47.3 million.

Prime Minister Douglas said that each parent must also have the ability to ensure that their children pursue tertiary education at a college or university of their choice.

Prime Minister Douglas disclosed that information from the Development Bank states that for the first six months of this year 78 students received loans totalling EC$4.8 million to study overseas.

“The days of approving loans only as a result of political affiliation as happened under the previous PAM Administration came to an end when I assumed the office as Prime Minister in 1995. I see students as Kittitians and Nevisians. The days of asking who parents are and their political affiliation during the PAM era have come to an end,” said Dr. Douglas, who said it is the duty of his Labour Administration to adequately prepare the young people to take up leadership roles in the public and private sectors.

“The era of rampant political victimisation of civil servants who support a party other than the governing party also came to an end when my Labour Party took office in July 1995,” said the Prime Minister, who referred to several recent incidents of threats of dismissal from candidates of the opposition PAM party to Labour Party supporters.

The St. Kitts-Nevis Labour Party holds seven of the 11 seats in the National Assembly. The Concerned Citizens Movement has two and the Nevis Reformation Party and the People’s Action Movement one each.