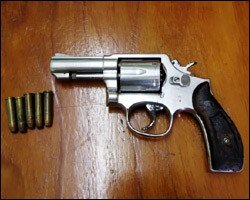 The Illegal .357 Smith and Wesson Seized

At about 6:40 am July 20th 2009, a vigilant officer who was on duty at the Ferry Terminal attempted to stop and search Joseph Fahie 29, of Market Street, who was at the time riding a bicycle westwards along the Bay Road.  He was suspected of having controlled drugs, arms and ammunition. Fahie resisted the officer’s attempt to search him and attempted to remove something from his waist during the struggle. The officer drew his service pistol and Fahie was injured in the leg.  Other officers responded and assisted in conducting the search on Fahie.

One 357 Smith and Wesson Revolver and five rounds of ammunition were found in his waist.  He was arrested and taken to the Basseterre Police Station where he was formally charged for possession of firearm and possession of ammunition, and was remanded to Her Majesty’s Prison after a court appearance. Fahie was taken to the JNF Hospital where he was treated for a slight abrasion to the leg and discharged. This brings to 19, the number of illegal firearms seized for 2009.

At about 6:20 am on July 21, police responded a report of shooting at the home of Shervin Williams at Godwin Estate. On arrival the officers examined the house and saw two bullet holes in the front door. Investigations revealed that while Williams and other occupants were at home, an unknown person or persons discharged several rounds of ammunition at the house causing the damages.  The scene was processed and evidence collected. Investigations are ongoing.