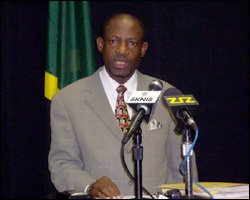 “Lex Consulting is not my company. Lex Consulting is a private company that is established as far as I know in the United States of America. It has been providing services to the St. Kitts-Nevis Labour Party as early as maybe two elections ago,” Dr. Douglas said in an interview on VON Radio on Tuesday night.

Dr. Douglas, the National Political Leader of the governing St. Kitts-Nevis Labour Party responding to allegations that he has acquired property by dishonest said he has worked his “butt off in this country to build opportunities for people including myself,” borrowed from several banks and is indebted to almost every bank.

He said it is “strange that Lex Consulting also featured in the last elections back in 2004.”

He recalled that Lindsey Grant had a paid political statement running from the final Friday afternoon of the campaign, “because someone it would appear in a bank had given information pertaining to transactions that were being made with the use of Les Consulting in the financing of our campaign.

Dr. Douglas said Lex Consulting has been providing consulting services for the St. Kitts-Nevis Labour Party for several previous elections passed and this one present.

“It is not my company. I do not own it. It is a company that is owned and registered in the United States of America and it has a local bank account here and a US bank account from which is does businesses as well,” said Dr. Douglas.

Responding to allegations that he has acquired property by dishonest means, Prime Minister said he has worked his “butt off in this country to build opportunities for people including myself, because I am not left out as a person in this country and so I have like anyone else, recognised that one area that the country is really progressing is in the area of real estate.”

“I have invested my hard earned money, whether it is what I have made from my salaries or other investment, or what I have borrowed from several banks here in St. Kitts and Nevis. In fact I am indebted to almost every bank in this country, in Nevis and also in St.Kitts,” said Dr. Douglas.

Giving more information, Dr. Douglas said: “All that I have, except my office that I had as a medical doctor  along with another property that I bought from (former PAM Minister and Politician), Constance Mitchum, when I was a practicing medical doctor on Lozack Road and my office in St. Paul’s are owned by the banks.”

“Only those two properties are completely owned by me, because I have completely paid off the banks for them, since the loan arrangements have been made.”

“I have paid it off in the time set by the bank, not before, not after. Whatever I own, all that I own have come through the banks of St. Kitts and Nevis and the records are there for anyone to see,” Dr. Douglas told VON Radio.

“I was a medical doctor before I got into politics. I did not make sand; I made money like any other medical doctor today making money. I had one of the largest practices here in this country. I ran an office full time in Basseterre. I ran one part-time in St. Paul’s, in Saddlers and also in Old Road. I did my house calls. I make money like any other doctor making money today. I saved and I invested. I have been investing from day one upon returning here in this country. First, I owned a drug store having return back from 1986, within six months of returning here. I joined my colleagues and practically bought out the drug store from Doctor Claxton,” said Dr. Douglas.

He said within two years he was able to buy a building on Adams Hill, which was a guest house and restaurant and gave details of his real estate investments including property at Frigate Bay.