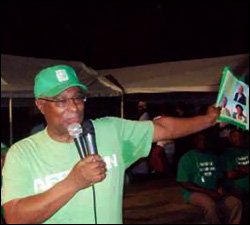 Premier of Nevis and leader of the Nevis Reformation Party (NRP), the Hon. Joseph Parry, launched his party’s 2010 Federal Election manifesto on Monday at Cotton Ground

Moments before he introduced the document, Mr. Parry reminded those present of some of the achievements of his Party in Government.

“Residents of Nevis, you have witnessed how NRP has weathered the worst financial crisis since the Great Depression and the temporary closure of our flagship hotel the Four Seasons Resort, which was knocked out of commission by Hurricane Omar in 2008.

“Not one single civil servant was sent home and that must be commended.  These are serious times and we need serious leadership which can be found in the NRP candidates, Hon. Hensley Daniel, Mrs. Patricia Hanley and Mr. Patrice Nisbett,” said the Premier.

Mr. Parry said their main efforts would be directed at Constitutional Reform, Security and Education.

Just before the manifesto was distributed to the massive crowd, Premier Parry said it was his party’s vision for all the people of Nevis to live in a society of law and order which afforded great opportunities and in his view, the only party that could deliver such was the NRP.

The launch was chaired by Mr. Ashley Farrell who welcomed a number of speakers including the candidates.  Mrs. Hanley shared her ideas in relation to the future of the women of Nevis. Her constituency allowance she stated would go towards health care and education programmes in St. George’s.

Mr. Daniel seized the opportunity to discuss his projects among the youths, such as training and the Homework Assistance Programme. He also spoke of the Senior Citizen Programme which provided seniors from across the island, the opportunity to get out of their homes on organised field trips and to attend weekly social gatherings.

When Mr. Nisbett came on the stage he discussed a number of pieces of legislation he had worked on, among them the landmark laws in relation to Geothermal.

“I looked at the legislation for Geothermal which was held by Hon. Mark Brantley during the previous Concerned Citizens Movement (CCM)-led Administration. That document gave away geothermal to St. Kitts under CCM.

“I then [prepared new] geothermal legislation that put geothermal back in the hands of the people of Nevis,” Mr. Nisbett said.