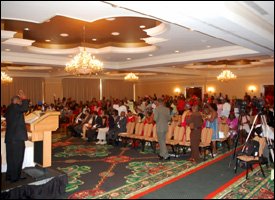 St. Kitts and Nevis Prime Minister Hon. Dr. Denzil L. Douglas placed his party in an election gear Sunday stating that his St. Kitts-Nevis Labour Party is mature and experience to continue to lead the twin-island federation during serious times.

“Our party has undertaken a historic task ““ the task of transforming this country from a one-crop, sugar- based economy into one that is modern and diversified, with a multi-pronged focus on agriculture, hospitality, information technology, and financial services. Into an economy with expanded opportunities for employment and entrepreneurship, for social mobility and political stability,” Dr. Douglas told 600 delegates and 150 specially-invited guests representing the diplomatic corps, business and non-governmental organisations during the opening ceremony of his party’s 77th Annual National Conference.

“Comrades, delegates, let us go forth from this 77th Annual Conference, united and fully determined to ensure that the next Government of St. Kitts and Nevis will be a Labour Government.  Let us step forward from this day, let us leave the sanctity of this hall, united ““ all for one, and one for all – energized not only by our horrific memories of those 15 years in the wilderness, but more importantly, by our shared knowledge that Labour has changed St. Kitts and Nevis for the better and St. Kitts and Nevis is working with capable hands in serious times,” said Dr. Douglas, who was later re-elected un-opposed for the 21st consecutive year as the party’s National Political Leader.

Dr. Douglas urged delegates to “step forward energized, strengthened, and determined to ensure a total electoral victory because, separate and apart from politics, and focusing solely on the interests of the country, we all know that Labour does, indeed, represent safe and capable hands for serious times.”

Reminding delegates, that the world is undergoing financial and economic crises the likes of which it has never seen, Dr. Douglas stated that it is now more than ever, that St. Kitts and Nevis had better have a government made up of people with a proven track record of skilled and responsible management.

“Labour has been able, thank God, to ensure that major foreign investment projects are still moving forward ““ Silver Reef, Ocean’s Edge, Christophe Harbour, the Marriott Condomium project, with our people working ““ at a time when similar projects are being closed all across the region.  Labour has been able to ensure that direct flights to and from London, New York, Miami, Charlotte, and Atlanta ““ with all the economic activity that these flights generate, and all the jobs that are tied to them ““ continue at a time when airlines are cutting flights to our friends and neighbours throughout the region,” Dr. Douglas noted.

He pointed that his St. Kitts-Nevis Labour Government has cut the country’s overdraft by 50 percent and reduced the country’s Debt to GDP ratio by 20 percent.

“Your government has slashed poverty in this country dramatically ““ and the Caribbean Development Bank attests to that. Your government has created the type of environment that has enabled the workers of this country to produce more in exports to the United States than Dominica, St. Lucia, Grenada, other OECS countries and Barbados combined. Your government has established health centers in Molyneux, Dieppe Bay, Saddlers, St. Peters, Cayon, St. Paul’s, and Newtown, and completely transformed the J. N. France General Hospital and rebuilt the Pogson Medical Centre,” the Prime Minister told the Party Conference.

Dr. Douglas said his government has also joined forces with the Regional Security System ““ the premiere Caribbean national security entity, the Royal Canadian Mounted Police, and the FBI to undercut and undermine and defeat gang violence and criminality.

He again stressed his government’s commitment to ensure that any Kittitian or Nevisian who has worked anywhere for ten years, they will be entitled to a gratuity when they retire.

“Your government is making land available to low-income wage earners at $2.95 per square foot, and giving concessions and exemptions to the banks to encourage them to make it easier persons who do NOT make high salaries, and therefore usually do not qualify.    But if the banks still turn these people back, your government is putting a $10 million facility at the Development Bank to help people to purchase the land they need anyway.  And your government is moving to ensure that once these first time land owners have begun making payments on land, they will be given title to that land, so they can start building the homes that they and their families need,” Dr. Douglas said.

“Comrades ““ Labour has delivered in the past, and, with your help, we will continue to deliver in the future, because in St. Kitts and Nevis ““ its working, with capable hands in serious times,” said the Prime Minister as he called on the party supporters to become energized, united and mindful “of what life was like during those fifteen years that the other party was in power.

“Fifteen years is a long time.  Just think about it – fifteen years from now would take us to the year 2024.  That is how long Labour and its supporters were in the wilderness.  That is how long the people of St. Kitts and Nevis had to deal with the unjust policies of an unjust government,” said Prime Minister Douglas.

“We have had 77 years of maturity and experience. And we can be proud to state that we belong to a country, a tradition, a system in which we, the people, choose the government that we want. Governments are not imposed on us in St. Kitts and Nevis, we choose our governments. And so, as the country gets ready to choose the next government, Labour’s delegates need to be mobilised,” said the Prime Minister.