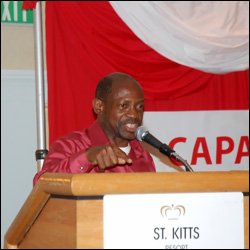 Re-elected National Political Leader of the ruling St. Kitts-Nevis Labour Party, Hon. Dr. Denzil L. Douglas has called for “the full support, understanding, love, unity” of its supporters as it gears up for battle in the upcoming general elections.

“We must get out into the high ways and by-ways, making sure that every person that is 18 years old and over and who is not registered to becoming registered over the next few months,” urged Prime Minister Douglas in his closing remarks at the 77th Annual National Conference of the St. Kitts-Nevis Labour Party.

“Get ready to make the very important mark in your life and that is the “˜X” to elect another government ““ another Labour (Party) Government and make that powerful statement that we have been making for the last 14 years,” said Dr. Douglas, shortly after been re-elected un-opposed for the 21st consecutive year as National Political Leader of the St. Kitts-Nevis Labour Party.

The theme of the Conference was “Labour: Capable Hands in Serious Times.”

During the business session of the Conference, delegates received the reports from the National Executive, the Treasurer and Auditors and endorsed several resolutions from the various branches of the Party.

A new National Executive was elected to serve for the next year.