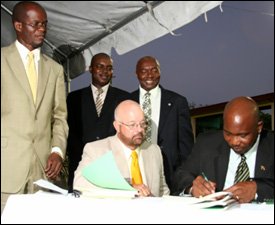 Legal Advisor to the Nevis Island Administration (NIA) Mr. Patrice Nisbett said the Geothermal Contract agreed on by developers West Indies Power Nevis Ltd.(WIP) and the NIA was designed to  put money into the Island’s coffers.

He made the comment during a recent interview with the Department of Information, as he addressed some of the essential features of the negotiated agreement.

“Instead of granting a full exemption from the payment of income taxes, we were able to successfully and skilfully negotiate a payment in relation to income taxes for income generated both on the domestic market and on the international market, from the sales of electricity to whichever market it is sold in by West Indies Power.

“In addition to the payment of Income taxes, West Indies Power has agreed to make a royalty payment to the NIA”¦ In relation to the royalty payment, the value of thee royalty shall be 5 percent of all gross revenue from all sources from the geothermal resources of Nevis. This would include all buyers of capacity, electrical energy and transmission in the Federation of St. Kitts and Nevis,” he said.

Mr. Nisbett explained that a royalty payment was made to the Crown or whoever for the use, as in this case, of the geothermal resource which belonged to the people of Nevis.

According to Mr. Nisbett, the team was also able to negotiate a 25 year Tax Holiday. During that time, WIP would be granted certain incentives that would foster development of the geothermal energy for the benefit of the people of Nevis.

The negotiating team of the Nevis Island Administration was also able to negotiate a 10 percent share holding in West Indies Power which would be held in trust by the NIA for the people of Nevis.

“We were also able to negotiate quite successfully, a stock option on behalf of the people of Nevis and with this stock Option we were granted the right at some point in the future when we choose to exercise it, to buy an additional 10 percent share holding in WIP,” he said.

The Legal Advisor further explained that with the ownership of stock, the people of Nevis would become entitled to dividend payments on that stock when the company declared dividends.

“This would be additional revenue going into the coffers of the NIA thus benefitting the general populace of Nevis,” he said.