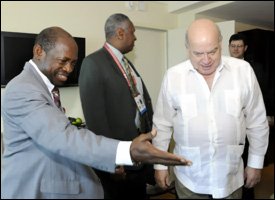 St. Kitts and Nevis is getting the assistance of the Washington-based Organisation of American States (OAS) to support a planned regional conference on crime.

“Crime remains an ongoing challenge to all of the countries and all of the peoples of the Western Hemispheric Region,” said Dr. Douglas, who is his capacity as chair of the Regional Security System, discussed the importance of a regional crime conference in talks with the OAS Secretary-General.

“Increasingly, CARICOM nations must pursue a multi-lateral and integrated crime fighting strategy and the conference that I have proposed to be held here in St. Kitts and Nevis is key to this,” said Prime Minister Douglas during his monthly Press Conference on Wednesday.

“I am pleased to report that the OAS Secretary-General not only understood the importance of this, but has committed the support of the OAS and its resources for this initiative in discussing crime and violence reduction in the hemisphere,” said the St. Kitts and Nevis leader, who is also the Minister of National Security. St. Kitts and Nevis’ Permanent Representative to the OAS, His Excellency Dr. Izben Williams sat in on the discussions.