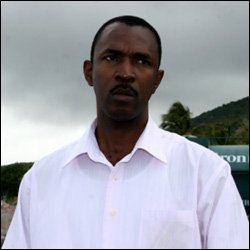 An expert from the Caribbean Community (CARICOM) Secretariat said Thursday, that the Memorandum of Understanding signed between his Agency and the Federal Government of St. Kitts and Nevis, for Nevis’ geothermal project on Earth Day – April 22, was a good coincidence.

Programme Manager, Energy, at the Secretariat Mr. Joseph Williams said the fact that renewable energy was a significant strategy in the context of climate change; it was in keeping with the ideals of the worldwide observance of Earth Day. He said it was a good coincidence for Nevis to have received CARICOM’s token support of US$38,000 for its green energy venture.

He explained that the Secretariat had implemented an umbrella Energy programme since 2008, under which the Caribbean Renewable Energy Development Project was excuted.

“One of the key objectives of the Project is to assist in the removal of barriers of the advancement of renewable energy. Among other things, the barrier includes policy and so we seek to provide policy development support.

Mr. Williams explained that the Nevis Island Administration (NIA) had approached the CARICOM Secretariat for assistance and given the pace of development of the geothermal project n Nevis, it was necessary to move quickly to provide the support.

“The support is in the scheme of things fairly small but we think it is important and timely and based on where the development is it will go a far way to start providing the kind of technical support that is needed.

“[It will] ensure that the government is in a position to make sure that maximum benefits are derived on behalf of the country from the development,” he said.

The CARICOM Official referred to the US$38,000 as a token since one of the broader objectives of the Energy programme, was to facilitate ongoing support in terms of financial resources.

He also said that the Secretariat’s mandate was to provide support to governments and facilitate the coordination of resources, as it sought to strengthen the government’s ability to be more effective in specialised areas and in the case of Nevis for its geothermal development.

Mr. Williams who spent one day on Nevis was accompanied by Advocacy and Communications Advisor, Office of the Secretary General/PIU from the CARICOM Secretariat Mr. Carlton James.