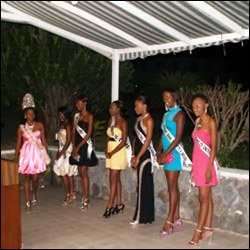 Premier of Nevis, the Hon. Joseph Parry has openly expressed his deep appreciation to all of the contestants taking part in this year’s Culturama. He said it takes strong, energetic and culturally minded persons to keep the festival alive. Mr. Parry made the statement at the Premier’s cocktail hosted in honour of the contestants and show organizers, at the Mount Nevis Hotel on Tuesday, July 14th 2009.

The cocktail reception fell closely on the heels of a runway-style fashion show held on Sunday at the Netball Complex.  The red-carpet event, witnessed by scores of fashion enthusiasts was hosted by the 2009 Queen’s Committee.  According to the organizers, the event was staged in honour of past contestants and corporate sponsors, as well as to showcase the sensational six for this year’s Miss Culture show.

The annual Nevisian festival celebrating its 35th anniversary this year, will include a Miss Culture Pageant, a Senior Calypso Show, a Mr. and Miss Talented Youth Pageant, a Junior Calypso competition, a Food Fair, Parade of troupes and J’ouvert.

This year the theme is “Culturama 35 Keep the Culture Alive.” The winning slogan was presented by Ercia Blake who received a plaque at the Cocktail from the Culturama Committee.  Her slogan was selected from some eighty-five entries. In addition to the plaque Ms. Blake will also receive a pass to all the Culturama festivities.

During brief remarks by the Chairman of the Nevis Culturama Committee, Mr. Halstead Sooty Byron recognized the Patron of the 35th Culturama festival, Mr. Owen Bussue Hendrickson of Butlers Village. “Mr. Bussue has contributed to Nevis’ Culture through folk instruments and music and it is because of his talent that the people of Nevis are forever grateful,” said Mr. Byron.

Culturama is slated to take place from July 30th ““ August 4th with many other pre- activities leading up to the festival.