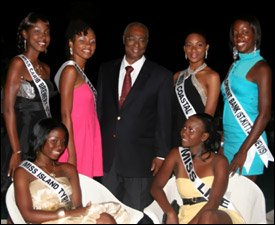 Minister with responsibility for Culture on Nevis Hon. Hensley Daniel urged Nevisians to use the island’s culture to add economic value.

Mr. Daniel gave the advice on Tuesday at a Cocktail reception at Mount Nevis Hotel, hosted by Premier of Nevis Hon. Joseph Parry, for participants in the 35th annual Culturama Festival.

The Festival is the island’s leading cultural celebration and will run from July 24th – to August 4th under the theme “Culturama 35 Keep De Culture Alive”. The Patron is Mr. Owen Bussue-Hendrickson of Butlers Village.

The Culture Minister who is also responsible for Social Development also pointed to the psychological benefits of Culturama and cited the season provided a cooling off period for the people of Nevis.

He said he was aware that countries that were void of carnival or cultural festivities had reported high levels of violence and other forms of social disturbances.

Meantime, Mr. Daniel used the opportunity to single out the contribution of the six Culturama Queen Show contestants dubbed the “Sensational Six”.

He urged them to utilise the opportunities that they would get from the Culturama Festival for their personal development.  He said the Nevis Island Administration (NIA) would endeavour to assist them in the future.

“In our government, we are all about that and we want to commit to ensuring that the girls do the things that they like to do to develop themselves because after the show in early August, we don’t want to forget them. I want to say to you that we will remain open to help you, to guide you and to ensure that you continue to be an ambassador for Nevis,” he said.