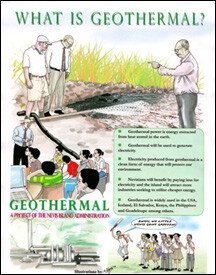 The Nevis Island Administrations (NIA) has taken a number of initiatives to simplify certain features of the ongoing Geothermal Development Project on the island, for the benefit of the people of Nevis.

One such programme was the publication of two leaflets which defined geothermal power, explained that geothermal would be used to generate electricity and that Nevisians would benefit through less costly electricity.

Other benefits identified were the island’s resulting ability to attract more industries, generate new jobs and protect the environment.

The leaflets which have been circulated to members of the public will also be circulated among students at the island’s learning institutions.

In a similar project, Junior Minister with responsibility for Natural Resources on Nevis Hon. Carlisle Powell, visited a number of schools throughout the island and enlightened the students on the many benefits of geothermal power to them, their families and by extension their homeland Nevis.

A number of radio and television programmes have also been directed at the public, in the Administration’s continued quest to inform the people of Nevis about matters which concerned the geothermal project.