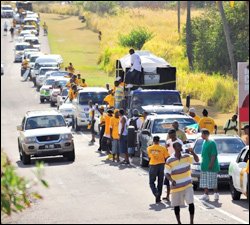 The Opposition People’s Action Movement PAM are in the final stages of preparation for what is expected to be another massively exciting and historic whistle-stop today Sunday January 17, 2010 .

According to the organizers of the event, the whistle-stop is going to be another truly historic  and massive occasion.

Early in 2009 the  party held the largest whistle-stop in St.Kitts-Nevis political history. The procession stretched for some 4-5 miles and was estimated by independent observers as well over 300 cars and almost 9,000 people.

This weekends event is expected to be an even larger whistle-stop and the traffic department has already began to prepare for the expected massive event.

The whistle-stop will begin at the foot of the historic Brimstone Hill and then head westwards along the island main road making very brief stops in St.Pauls,Dieppe Bay, Saddlers, Tabernacle, Molyneux,Cayon,Conaree,St.Peters,Village,Boyds,Old Road,Halway tree and culminate in Cleverly Hill Sandy Point with a massive Public Meeting.

Most political pundits and analysts have declared that the upcoming elections will be the most significant definitely in recent times and arguably of all times. The PAM On the Road to Victory  Campaign For Change 2K10 is one of the most historic and memorable campaigns of our generation.

“It has always been tradition through the years to begin such events in Basseterre, said a member of the Campaign For Change 2K10 Grand Whistle-stop organising committee. “However it was felt that the historic brimstone hill on the outskirts of the hometown of our exciting young parliamentarian Hon. Shawn K. Richards will be the perfect setting and start point for what will be a historic whistle-stop,” the member continued.

The whistle-stop is expected to begin at 12:00 noon and the Public Meeting begins at 8:00 pm.