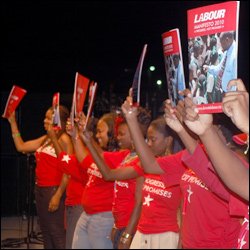 In the presence of a crowd of 18,000, St. Kitts and Nevis Prime Minister Hon. Dr. Denzil L. Douglas presented his Labour Party’s 2010 Manifesto to the people of the twin-island Federation.

Dr. Douglas before presenting 8 young people with copies of the 55-page document entitled “Progress, Not Promises,” told the Nation he is convinced that any disruption in the leadership and policy-making framework of this country at this particular time in its history would constitute a betrayal of the people of this country.

The St. Kitts and Nevis leader told the massive crowd as well as radio listeners and television viewers that the future looks bright under a Labour Party Administration and that his Team looks forward to a new Term with great enthusiasm.

“I have never offered myself in Elections without serious reflection on my ability to make a difference for our people. For this year’s Elections I did undergo the usual self-evaluation in deciding whether I should continue to offer myself to serve you as Prime Minister. But I did not have to reflect for very long,” said Dr. Douglas.

He said that the monumental challenges before St. Kitts and Nevis at this time made it very clear to him that at this moment in its history when the globe continues to throw up challenges and problems of unprecedented magnitude, “my country, St. Kitts and Nevis, needs me and the Labour Party more than ever.”

“Even more critically, the overwhelming support that our people have demonstrated during this campaign and throughout the period that the successful Labour Team in office, has persuade me that you, the people of Labour and our proud nation, share this view,” said Dr. Douglas, adding: “It is not my aim to hold on to the position of Prime Minister until I am an old man. I am sure you would not wish that for me.”

He pointed out that with himself and the incumbents, the Hon. Sam Condor, the Hon. Dr. Timothy Harris, the Hon. Cedric Liburd and the Hon. Asim Martin, we have an effective team that could provide policy continuity in these difficult times.

“But at the same time we have added new blood, and fresh ideas through the addition of Ms. Marcella Liburd, Dr. Norgen Wilson and Mr. Glen “Ghost” Phillip to our progressive team. Of course, as time rolls on, Labour will continue to change from within in keeping with the demands of the times,” said Prime Minister Douglas.

“Comrades, you ready? Let each of us work hard over the next few days to bring your neighbours, co-workers, relatives and friends on the winning train. There is much at stake,” he said.

Presenting the vision of the country, Dr. Douglas gave the first copies to the manifesto to 8 young people as a document of the future.

“We are proud of our country. Let us hold hands, let us unite and let us raise our hands to the heavens to invite the blessings of Almighty God onto our children, our youths, our citizens and residents and our leaders,” said Dr. Douglas to the thunderous applause to the thousands present.

“All of these plans are included in our strategy documents including the budget and the medium-term Adaptation strategy. We believe that it is reckless to just promise a shopping list of projects outside of the context of the overall planning mechanism. These plans include the building of a second pier at Port Zante, the provision of lap-top computers to our children and the establishment of facilities to ensure that every person that is provided land under the Special Land Distribution Initiative is given the opportunity to build his own home,” said Prime Minister Douglas.

He said a financing facility at the Development Bank will be set up as well as a guarantee scheme that would help people approach other banks but who do not have all of the necessary collateral.

The Guarantee Scheme would also assist students who have been approaching the Development Bank or Commercial Banks for loans, but who do not have the necessary sureties or collateral.

“As of now, virtually every student who wishes to be provided funding for higher education is provided such funding at the Development Bank without regard to politics or other irrelevant criteria. But there are still some persons who find it difficult to get the two sureties required by the Banks to secure student loans. We intend to remove this impediment through the operation of the new Guarantee Scheme that will commence operations before the end of the first quarter of this year,” said Dr. Douglas.