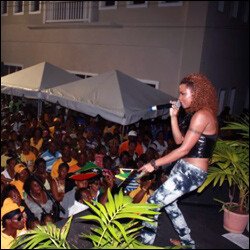 Despite getting a friend of the nation to make a US$10, 000.00 donation, it is only a pin being dropped into the ocean to what is needed to help Haiti. Therefore Government should come forward with a much more meaningful donation for the people of that earthquake-ravished country.

This is the sentiment expressed by Leader of the People’s Action Movement, Lindsay Grant at a recent Haitian-Releif Concert organised and staged by opposition People’s Action Movement PAM party. Grant  is of the firm belief that St. Kitts and Nevis’s gesture is disappointing, taking into consideration that the Prime Minister only responded to help because of the enormous pressures he received after PAM got immediately involved.

Grant said he believes that the people of St. Kitts and Nevis would give generously through voluntary contributions of cash and kind.

“We have a responsibility to assist our brothers and sisters of Haiti as they have been suffering immensely, and we in St. Kitts and Nevis can relate to suffering as we are experiencing our sufferings as well. But we should recognize the importance of giving,” he said.

“I must admit that when I perused the internet and saw the international media reports, it was the first time that I was emotionally affected to such a level by a national tragedy”¦It is horrendous, it is painful, it is unbeearable, it is heartbreaking knowing that people are still trapped, some are missing and buildings are still collapsing. I have to admit that it is a really sad situation with some 100,000-odd people dead,” Grant told an exceptionally massive crowd last night (Jan. 15) at a concert held to raise funds for relief assistance for Haiti.

Addressing the Haiti dilemma, Grant said that he and his party understand the meaning and implications of disaster for any country. He questioned the Prime Minister’s lackadaisical approach, noting that they should have responded earlier, taking into consideration that Haiti’s international superstar Wyclef Jean is slated to perform at a Labour concert in the Federation.

He disclosed that in an effort to ensure smooth collection of assistance for the people of Haiti, he had identified the Red Cross organization to which his party would turn over all contributions for distribution to Haiti. He said that emphasis has been placed on financial contribution as a start and measures have already been put in place for the acceptance of pledges for material support.

“We recognize that there will be some challenges in terms of getting material support to Haiti, therefore, we are focusing on financial donations and contributions as it would make the Red Cross’ job much easier,” he explained.

“I want to guarantee that transparency will be maintained so as to ensure that people’s funds are accounted for, thus our choice of Red Cross as we are very confident that an effective job will be done by them,” he added.

Grant admitted that he would not rush to prescribe additional solutions, but rather strongly believes further action should come after CARICOM’s intervention and subsequent discussions with the people of Haiti.

“What I would say immediately, is the need for providing financial and other relief to them right there. We should be concentrating on what assistance we can take there, which is far from telling somebody who has tons of rubble still on them that we are hoping to resettle them. What we need is physical help to rescue the thousands who may still die.
For every hour of delay, the possibility exists that more people will die,” the opposition Leader lamented.

Grant declared that the tragic events in Haiti should provide the occasion for St. Kitts and Nevis to seriously review the Federation’s own disaster preparedness strategy so as to ensure if faced with eventualities the nation could respond appropriately and effectively.

He stressed that St. Kitts and Nevis is located in the hurricane belt and could also be affected by other disasters. Therefore, the public should know that the people of this Federation are not immune from natural disasters.

He declared, “”¦as Kittitians and Nevisians mobilize their resources to aassist the suffering people of Haiti, it is perhaps an appropriate time for us here in St Kitts and Nevis to review our own system.”