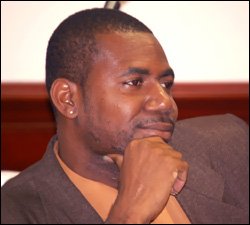 Speaker of the St. Kitts and Nevis National Assembly, the Hon. Curtis Martin said Tuesday he will not allow the lawmaking body to be used as a political platform.

The Speaker made the statement after the Political Leader of the opposition People’s Action Movement, Mr. Lindsay Grant, the Party’s National Spokesman, Mr. Chesley Hamilton and another party member, Mr. Slieh Boncamper, who were in the Visitor’s Gallery,  disrespected the lawmaking body while Prime Minister the Hon. Dr. Denzil L. Douglas was making a statement.

Although he did not single out, who did it, the Speaker said he observed the waving of white handkerchiefs from the gallery. Grant, Hamilton and Boncamper were the only visitors in the gallery besides a reporter.

The Speaker said he observed the waving of white handkerchiefs and cross talking.

“You know who you are and there is no need to make any comment,” said the Speaker, who noted the tense political environment and called on Mr. Grant and his party colleagues to “act as statesmen.”

Directing his attention to Mr. Richards, who disrupted Prime Minister Douglas while he was making the statement, the Speaker told the lone elected PAM Representative, there was no call for him to shout out loser.

“You lose, you lose,” shouted Mr. Richards across the floor.

Some persons in the press box said they observed the PAM officials in the gallery communicating with Mr. Richards.

“I am the boss in here and what I say goes. I am not tolerating any nonsense from politicians,” said the Speaker.