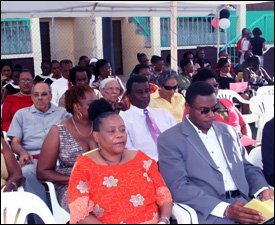 Minister responsible for Social Development in the Nevis Island Administration (NIA) Hon. Hensley Daniel likened the official renaming ceremony of the Netball Complex to the Cicely Grell-Hull and Dora Stevens Netball Complex to a Nevisian renaissance.

Mr. Daniel’s comment came when he delivered remarks at the ceremony on Saturday. The event was the first of seven ceremonies hosted by the Ministry of Social Development which will rename seven of Nevis’ landmarks after eight Nevisian Heroes.

“This ceremony symbolise a Nevisian renewal, a Nevisian renaissance similar to that period of the early 1970s when the island needed to re discover its potential and respond with the formation of the NRP, the Credit Union, Culturama all of which reflected the  island’s commitment to charting an independent course of action,” he said.

The Minister reminded all, that Mrs. Grell-Hull and Mrs Dora Stevens would become celebrities as their names were permanently associated with the facility. He said they would also become reference points for the island’s youths and subjects for further research.

He underscored the importance of renaming the important landmarks after Nevisian heroes which he noted would ensure that the efforts of those who had laboured without reward, toiled without seeking for rest and given without counting the cost were not forgotten.

“We are honouring these two remarkable women of our time because in the words of Rabelais, they are easy in honest company, have a natural spur and instinct which drives them to virtuous deeds.

“These women help us to give Heroes day new meaning. They are real. To the young I say, these are our heroes not those fake ones you see on the television,” he said.

Mr. Daniel explained that the philosophy which underpinned the ceremony was to cast the society in the image of local people.

“These two women have been involved for more than 50 years in building the nation and shaping the society.

The Social Development Minister said he was persuaded by the charm and experience of both honourees that when one worked devotedly for the good of others their own enrichment was achieved in the process. “Look how young they look, it pays to serve others selflessly,” he said.