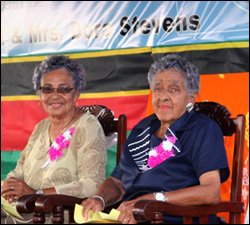 The Netball Complex in Charlestown has a new name. As of Saturday, the important sporting venue was renamed by the Nevis Island Administration’s (NIA) Ministry of Social Development, in honour of two women who contributed to the development of netball on Nevis. The facility is now called the Cicely Grell-Hull and Dora Stevens Netball Complex.

The new name was unveiled during a cheerful but moving ceremony Saturday, which was attended by the honourees, government officials, family and well wishers.

Mrs. Grell-Hull in her response to the accolade expressed her sense of deep gratitude and humility, for having her name etched in Nevis’ netball history.

“I am humbled too by this moment. You see, I never consciously worked to get into the limelight. Rather, any contribution that I might have made towards the development of the game of netball, came as a result of my belief that we are all required to give unstinting service to our country,” she said.

Mrs. Grell-Hull who was the first President of the Nevis Netball Association recounted her many rewarding experiences during her involvement of the game and singled out her experience as captain and goal shooter of the very first Nevis Excelsior School Netball Team which was selected in 1935.

“I am pleased by this moment. I am pleased not only because my contribution to the sport is being recognised in this special way but also because I am in sufficiently good health to participate in this ceremony. My Presence is therefore testimony to the possible contribution of netball to longevity. I give God thanks and praise,” she said.

She also used the opportunity to encourage the youth in particular to become members of netball teams or clubs and to learn to play the game which she said had many benefits.

“It is now well established that regular exercise and team sport are beneficial not only to one’s physical well being but their mental, social and spiritual well being as well. Let us remind ourselves that it is the youth of today who will ultimately take the leadership mantle as administrators of the sport in netball forward,” she said.

Mrs. Grell-Hull also challenged all to continue to support netball in a big way as she extended best wished to the NIA’s Ministry of Sports and the Nevis Netball Association success in their future endeavours.

Meantime, Mrs. Stevens also registered her gratitude and said she was humbled to be selected by the NIA for the honour.

She too recalled her netball days in the 1960’s and thanked Mrs. Grell-Hull under whose presidential leadership things were done efficiently and in order. Mrs. Stevens later became the succeeding president.

While she thanked her “partner in crime”, Mrs. Mariney Newton for their relentless partnership in their work for the netball association, Mrs. Stevens urged today’s netballers to take advantage of the opportunities that availed them.

“These are the days of great opportunities in sports and academics. Discipline is the key word. So to the Netballers, I say be punctual at practices, listen to the coach and manager remember there is only one captain.

“Remember also, it is not only that a match is one but how you play the game. Once that netball uniform is on, you are not only Sandra or Susan but a well behaved member of your Club team or island team. Always seek to bring honour to your team, so that by extension you will also be bringing honour to the island of Nevis,” she said.

The renaming ceremony was the first of seven landmarks which will bear the name of eight local Nevisian Heroes. The initiative was launched in September on National Heroes Day, 2009, by Minister of Social Development in the NIA Hon. Hensley Daniel.