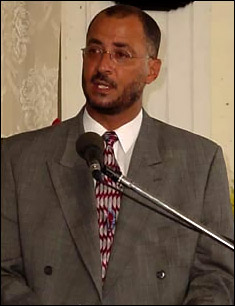 The numerous and unsightly political billboards mounted by agents of the People’s Action Movement (PAM) all over the St. Kitts landscape does not have the permission from the appropriate department.

Minister of State for Tourism, Sen. the Hon. Richard Skerritt reminded Parliament Wednesday of the well established motive and policy of the opposition People’s Action Movement to attempt to destroy the economy of the country as long as they do not hold the reins of government.

“And it is clear to me that these PAM political billboards are  part of PAM’s desperate attack on the exceptionally high level of investor confidence and positive buzz that has been generated in the North American and UK marketplaces about the future of our Tourism sector,” said Minister Skerritt.

He told Parliamentarians that the numerous and unsightly political billboards have been constructed on public roadside spaces and nailed on to lamp-posts, belonging to the Electricity Department, without seeking the appropriate permission from the Department of Physical Planning, in the Ministry of Sustainable Development.

“Mr Speaker, because the appropriate Government  agency does not fall under the responsibility of the Ministry that I have the honour to lead, I can only hope that the relevant authority in the Ministry of Sustainable Development will take the necessary remedial action in the interest of the protection of our rights as citizens to enjoy our natural environment, visually and otherwise, and in the midst of this blatant disregard for public rules and good order by the leaders of the People’s Action Movement,” Minister Skerritt.

Minister Skerritt  stated that the timing of these billboards is designed by the opposition People’s Action Movement (PAM), which holds one seat in the 15-member lawmaking body “to target the hundreds of returning nationals and foreign visitors who will be arriving on St. Kitts and Nevis from the end of next week for three successive major international events, the Anguilla-Nevis and St. Kitts National Associations (ANSAR) Reunion, the St. Kitts Music Festival and the two International one-day cricket matches between Australia and the West Indies.”

He said that the unsightly glut of billboards is already destroying the beautiful landscape and vistas of the country and threaten the wonderful island-wide visitor experience that all nationals and tourists alike have grown to love and cherish.

“The natural roadside beauty and cleanliness of our fair land, for which the Management and Staff of the Department of Parks and Beaches and several volunteers, have worked so hard to maintain. This beauty is now at risk because of the unscrupulous anxiety of a few politically-motivated individuals,” said Minister Skerritt.

He said it is his understanding that the normal practice is that only after an election date has been officially announced that such a large number of political billboards would be allowed to be mounted by any political party without going through the process of seeking formal permission from the appropriate Government agency.