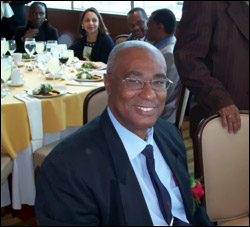 This year, the honour was bestowed on Grenadian son of the soil Dr. Roy Haystick CEO and CACCI President.

“I congratulate Dr. Roy Haystick for the great work he has done to promote small business and develop Caribbean Unity among business owners in New York,” said Premier Parry.

During the very well articulated speech, Premier Parry indicated that on his way to the hotel from the airport, he received the good news that geothermal energy had been found on Nevis and that the first plant would be able to supply both St.Kitts and Nevis with electrical power. “Nevis will be the first Eastern Caribbean and Caricom member to have the supply,” he informed the highly responsive and appreciative audience.

The Premier added that it is also the hope of his Government to be able to supply energy to regional islands as far as the United States Virgin Islands in the very near future.