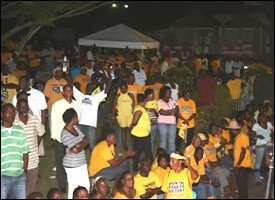 The rank and file of the People’s Action Movement joined the party leadership for a fun filled day of celebrations to launch the young and dynamic new candidate in Constituency #7 Mr. Ronald “Louis” Williams.

The day began at about noon with an island wide whistle stop that began in Bourryeau Village and traveled through St. Pauls culminating in Molineux with a grand rally. The whistle stop grew in each village as it wound its way the island and excited supporters joined in the celebrations. As the vehicles pulled into Molineux the seemingly endless train drew onlookers from through its environs to witness the spectacle that was clearly a foretelling of the defeat of Labour in Constituency #7.

The rally was a family oriented event that included every age group in the exciting program. Young Tia Clarke was the toast of the even for her wonderful recitation of Maya Angelou’s poem “Still I rise.” Her performance was complemented by melodious a solo that resulted in an encore in addition to a stirring prayer and rendition of the National Anthem. The party atmosphere was heightened by the quantities of food and drink consumed as the massive crowds mingled with party leaders.

The cutting of the ribbon to officially open the constituency office brought Mrs. Vashti Williams to join her husband and candidate and take her place in the celebration. The family celebration just highlighted the importance of families in the party and program that PAM is preparing for the country. It was just another example of PAM doing while Labour is only talking as everyone knows that stronger families is a campaign point for a Labour candidate but these families at the highest levels of their party are nowhere to be seen.

Mr. Williams, popularly known as Louis, was given a rousing and heartfelt endorsement by his fellow candidates. They went into great detail about the sterling character of the man, his brilliance, his dedication to family, service and community, and the reasons that change is so badly needed in Constituency #7, whatever the boundaries.

The event ended in the wee hours of Sunday morning with a serenade by a local band that kept the euphoric crowds entertained and dancing.