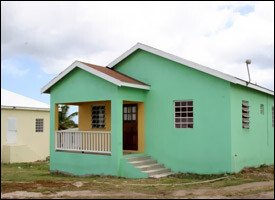 The Nevis Island Administration added another feather to its cap on Friday, when Housing Minister Hon. Robelto Hector officially opened the second housing development on Nevis in two years.

Harbour View Housing Development in Ramsbury Site comprises of 16 homes. Construction of the 16 homes commenced in 2006 under the direction of the Board of the Nevis Housing and Land Development Corporation (NHLDC).

In his address at the official ceremony Mr. Hector said he was honoured and felt a sense of pride with the expansion of the constituency.

“Today we are witnessing the expansion of our constituency by 16 homes. It is indeed the fulfilment of the vision expressed in the 2007 Budget Address when the Premier Hon. Joseph Parry and the Nevis reformation party Government vowed to change the housing landscape of this country.

“He said then and I quote “Home ownership will no longer remain the prerogative of the rich.” Today we are here to witness yet another realization of a promise made a promise kept,” he said.

Mr. Hector noted that the NIA had recognised the importance of the economic and social benefits that were derived from home ownership.

“A home provides shelter and security for families. There is pride and joy in owing your own home. Owning a home also fosters involvement in community life. People invest more in their neighbourhoods and engage more in civic activities when they know they have a personal stake.

“Home ownership is also beneficial to the economy because it encourages people to save. When people save they are encouraged to invest and form small businesses which in turn help to stimulate growth in the economy. It is the understanding of these benefits that fuels our drive to endure that the opportunity is afforded to everyone regardless of race, gender, income or political affiliation,” he said.

Mr. Hector said the official opening of the 16 homes should also be viewed as the birth of a new community whose members would be forever linked by their close proximity.

However, he expressed hope that the new development would embody the characteristics of social order and harmony: to treat each other with decency and respect and to work together towards common goals which would make life in the new community of the highest quality.

The ceremony was dotted with much entertainment and was witnessed by a large cross section of the public. The Vote of Thanks was given by new homeowner Dr. Rolston Archibald while Chair person for the event was another homeowner Ms. Julietta Parris.