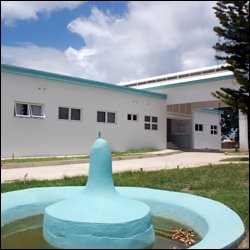 Evidence has surfaced that hundreds of thousands of dollars earmarked to upgrade the Pogson Hospital in Sandy Point in the mid-1980’s were diverted by the PAM Administration for use at the main hospital in Basseterre.

The money donated by the Canadian Government through the Canadian International Development Agency (CIDA) was to be used to construct a Pediatric Wing at the Pogson Hospital.

But a letter sent to the Government of Canada on behalf of the PAM Government of Dr. Kennedy Simmonds agreed to the cancellation of the project and the funds used at the J.N. France Hospital.

The Labour Party candidate for St. Christopher 5 (Sandy Point/Fig Tree) in next Monday’s general elections, Dr. Norgen Wilson said the cancellation shows lack of commitment by the PAM Administration to ensure that the children of Sandy Point received the best healthcare.

“If PAM found it possible not to use the monies earmarked for upgrading the Pogson Hospital for a community that had been electing their representative and giving them a seat election after election after election for so many years, it is an indication that they do not care about the people of Sandy Point,” said Dr. Wilson.

The former Cuban-trained District Medical Doctor was very much involved in the demolition of the old structure and the construction of the brand new Pogson Medical Center.

ï¿½We have not just a hospital, but a new Health Centre, a pharmacy, a dental care unit, laboratories, x-ray unit and offices under one roof,”boasted Dr. Wilson, who said the Labour Party is a party of progress, ï¿½and when we say we are going to deliver, we deliver.”

“When it was being built, the Hon. Shawn Richards and the leadership of his PAM party criticised it. They referred to it as the Shaolin Temple. PAM called it the AIDS Centre and other derogatory names. The new Pogson Hospital has been built for use by all the residents of Sandy Point and the surrounding areas when needed,” said Dr. Wilson.

“PAM had an opportunity to build a pediatric wing at the Pogson Hospital and they did not. It took a Labour Government to come forward and rebuild and provide a new medical facility for the people of Sandy Point and all the surrounding communities,” said Dr. Wilson.

The newly-reconstructed Pogson Medical Centre has enhanced the quality of healthcare provided by the Medical, Nursing and Allied Staff for patients and clients on a daily basis.

The Pogson Medical Centre is comprised of the Pogson Hospital and the Sandy Point Health Centre. Both are located in one structure on the original Pogson hospital site.

Additional features include closed circuit television, security doors with entrance codes, and fire stations throughout the complex, a modern telephone system with paging capabilities for the entire complex, and underground parking for the staff.

The Pogson Medical Center was constructed at a cost of EC$5.7 million.