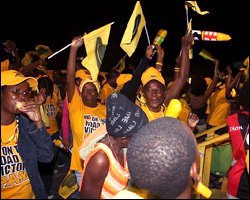 Leader of the People’s Action Movement, Lindsay Grant at a massive meeting in market Street launched his party’s manifesto on Tuesday evening. The 34 page document was launched under the theme, Platform for Change and saw several of the candidates speaking from the manifesto under their various portfolios.

Grant declared that his party has a track record of delivering to the people noting that they are not a party of promises but one of hope and opportunity. He pointed out that under a PAM administration young people would be able to own a piece of the rock’.’ Grant told supporters that while the Government continues to boast about their housing policy it is nothing more than them giving with one hand and taking with the other.

Owing a piece of the rock is pivotal to the self determination of our people. It does something to our psyche as a people when we live like huddled masses and in turn watch foreigners come from the four corners of the world and buy  our birthright for a penny and a son,” Grant noted. He declared that this will not and must not continue giving the assurance that under his administration it will not continue. Pointing to his land policy he told supporters that within its first 100 days in office, we will sell Government land to locals, in particular the youth, at the price of $0. 99 cents per square foot for all sizes of residential lots.

He went on to stress that within its first year in office, individuals who paid what he dubbed as Labour’s higher land prices will be refunded in the form of relief from the payment of duty free and consumption taxes when constructing their houses. “Owners of the so called affordable homes’ will receive a 25% reduction in monthly payments. This too will result in the lowering of the cost of living. Nationals will get preference over non nationals when purchasing government lands,” he said.

Grant went on to stress that the housing policy of the People’s Action Movement will be built on fairness and transparency. He noted that his party guarantees the people of the federation that government properties will be allocated by an independent committee free of political interference and election manipulation. He stressed that the youth will be able to own a plot land and obtain special incentives to build their first home.

He added that he his party’s manifesto seeks to create a new transformation of the people of the federation. He said that the manifesto is the new vision for St Kitts and Nevis. “These are not promises. They are serious commitments and this PAM team is a serious team. I urge each and everyone of you to read this document set for yourself, make the comparison and I am sure you will find that you want to be a part of this platform for change,” Grant said.

He urged supporters to embrace a new future filled with hope and inspiration stressing the need for them to take a bold step with him as the Leader so that together they can build a brighter future for the federation’s children and their children. A number of other issues were addressed at the launch which according to Grant is geared at ensuring that the people of St Kitts and Nevis are able to recover from the high crime rate, high cost of living and corruption that he said have plagued the federation for the past 15 years.