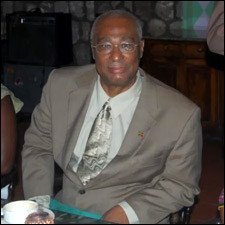 The Luxurious Oualie Beach Resort Hotel was alive with festivity on Friday, July 17th, as over 500 guests gathered for a cocktail reception celebrating the Nevis Reformation Party’s (NRP) third year of leading the Government of Nevis.

The highlight of the evening was a short but powerful address made by Premier of Nevis, the Hon. Joseph Parry, who was welcomed to the podium with a rousing round of applause and standing ovation.  He greeted all the attendees, first discussing the special occasion of the NRP anniversary stating, “This, the third year, is the period of development as there are much expectations and high aspirations for our people.  It is a period of continued empowerment and infrastructural growth.”

Throughout the evening guests were treated to a delectable menu of cocktails and dinner, music by the Caribbean Roots and entertainment supplied by Calypsonian, Nutsy, with his hit song Miracle Man. The Cotton Ground Masqueraders were the real crowd-pleasers with their usual gyrations and cultural treats. There was also a session where participants were able to answer questions in order to win a lunch date with a Minister or Advisor of Government.

The Nevis Reformation Party gained the reigns of Government in Nevis on July 10th 2006, and has embarked on a program of continued development for all residents of the island.  From all reports, the majority of Nevisians are very satisfied with the performance of the NRP led Government, and wishes them continued success in the future.