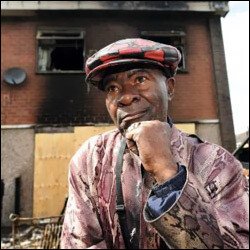 A Kittitian-born Carnival costume designer in Manchester, England is counting his losses after fire, believed to be deliberately set, tore through his home.

The Manchester Evening News reports that police are investigating whether a veteran costume designer was deliberately targeted by arsonists.

Alexander Herbert, 72, known as “Mr. Carnival,” has dedicated his life to producing stunning costumes for the country’s top Caribbean events.

But the pensioner’s life’s work – including more than 90 stunning costumes – was destroyed when fire tore through his Ancoats home.

Detectives believe the blaze at the terrace home on Mozart Close was started intentionally and are considering the possibility that the designer was singled out because of his festival links.

Mr. Herbert, born on the Caribbean island of St. Kitts and known to friends as Peddy, came to Britain in the 1960s to work as a carpenter.

However his life-long interest in costume design resulted in a career-change as he caught the attention of festival organisers.

He was for many years a driving force in Manchester’s Moss Side carnival and has received dozens of commissions as well as funding from the Arts Council.

The grandad was preparing to display some of his designs – which transformed the wearer into giant animals, characters, and even a giant plane – at a one-off show at the City of Manchester stadium.

He said: “When I opened the door I could see smoke coming out. When I opened it and tried to come out, the handle was so hot that it burned my hand.

“I can’t imagine why they would do something like this. All my work was in the shed. It has been totally destroyed. I had bought £400 of new material which was in the house. That has been destroyed as well. These costumes were my life. Some of them took me months to make. I just can’t believe they are gone.”

Adactus housing association, which owns the property, is trying to find a new home for the pensioner, who has been put up in a hostel.

Mr. Herbert had returned from attending Manchester’s Caribbean carnival and was asleep in front of his television when he was woken by his fire alarm at 3.45am on Sunday. He barely managed to escape the property before it fully caught fire.

Police believe a shed at the rear was targeted by arsonists. It then spread to the rest of the house.

Detective Constable  Paul Shacklady said: “At this stage, it is unclear if he was singled out because of his collection, whether or not it was just someone messing around or whether it was an accident caused by something like a discarded cigarette.”