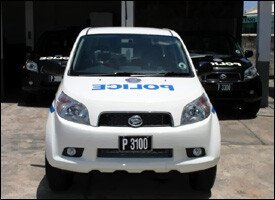 St. Kitts and Nevis Prime Minister Hon. Dr. Denzil L. Douglas has been outlining several initiatives being taken by the Ministry of National Security to equip the police to confront the challenges of crime and violence.

He said the government was doing its part to ensure that the security forces confront, apprehend and bring to justice persons who cause trauma to the St. Kitts and Nevis society.


Dr. Douglas said the ongoing improvements to the physical plant at the Basseterre Police Station including the re-painting, re-tiling, air-conditioning are some of the major environmental upgrades to that facility.

“In addition, overall security is being heightened via the installation of strategically placed cameras at that and other sites. Work continues on Dieppe Bay Police Station with an anticipated 2009 completion date. Hand in hand with ongoing physical upgrades, however, is the boosting of the effectiveness of our law-enforcement personnel,” said Dr. Douglas, who is also the Minister of National Security.

Dr. Douglas said timely, aggressive, and successful prosecution is key and reported that just a few days ago some 30 plus officers were actively involved in special training to sharpen their ability to successfully prosecute cases.

“In addition, we have dispatched Criminal Investigations Department officers to Barbados for advanced training in investigations.  Our police force has recently acquired a Comparison Microscope to dramatically improve our ballistics and fingerprinting analysis.  Determined to heighten mobility, cut response time, and maintain a visible presence in our communities, new police jeeps have been provided to St. Paul’s, Old Road, and Tabernacle station,” said Dr. Douglas during his weekly radio programme “Ask the Prime Minister.”

“Just two weeks ago, for example, a very alert Officer Carlton Duncan apprehended a male at the ferry terminal who was armed with a .357 revolver and 5 rounds of ammunition.  That person has since been tried and sentenced to three years in jail.  In addition, someone has already been arrested in the recent Godwin Ghaut murder of Dexter Marsham.  And our collaboration with the European Union, the FBI, the Regional Security System and other international entities continues.  Finally, the nation’s upgraded and considerably expanded 2009/2010 Policing Plan has just been completed,” said Dr. Douglas.