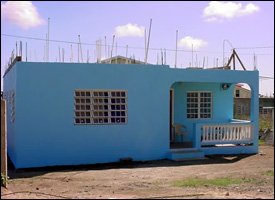 The recently established Land Distribution Committee has been successful in speeding up the government’s land distribution policy.

Prime Minister Hon. Dr. Denzil L. Douglas said the Special Land Distribution Initiative (SLDI) launched late 2007 has been given new life and nearly 300 acres of land has been committed to the programme.

He said as of January 2009, 285 acres have been committed to the Programme with 1,395 lots created under the SLDI. 500 lots have been offered for sale to SLDI applicants with 231 applicants completing their surveys and 130 SLDI making payments for land.

“I visited the site of the Stapleton Gardens Housing Development. This is a major housing development site with well over 300 lots available and together with these new sites that we have opened up over the last few months, we have close to 1,400 house lots that have been made available,” said Prime Minister Douglas at Wednesday’s Press Conference.

The Special Land Distribution Initiative was created to promote the personal empowerment and economic advancement of our nationals, through land ownership specifically.

“Although it was well publicised that this programme had been specifically designed to provide land to those who had never owned land, the announcement of the programme resulted in a flood of applications, many of them from persons who had already acquired land and who in fact had homes via one government programme or another,” said Prime Minister Douglas.

He said that to address the problem, the ministry was forced to develop a much more rigorous screening system and all of this added time to the process.

“I am pleased to say, however, that the new screening process is now in place and the programme is fully operational,” Prime Minister Douglas said.