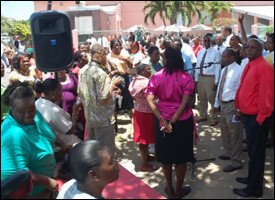 Legislation which will provide workers with a gratuity for years of long service is now before the St. Kitts and Nevis National Assembly.

St. Kitts and Nevis Prime Minister Hon. Dr. Denzil L. Douglas told workers on the C. A. Paul Southwell Industrial Site Wednesday that legislation to provide for this benefit was introduced and given its first reading in the lawmaking body last week.

“We promise you that we will give you the opportunity, those who are working on the industrial estates for 10, 15, 20, 25 and 30 years that you will leave with a gratuity. It was last week Thursday that the Government introduced in the National Assembly the first reading of a new law that will make sure that those of you who would have worked for 10, 15 and 20 years that when you leave you will be able to get a gratuity,” said Dr. Douglas told scores of workers during a back to back mid-day public meetings during the lunch breaks at the C.A. Paul Southwell Industrial Site.

Dr. Douglas told the workers that his St. Kitts-Nevis Labour Party Government remains committed to providing the opportunities for the ordinary nationals including those working on the industrial site to own their own homes.

He recalled that the former PAM administration in their 15 years in office built only 200 homes compared to his Labour Administration that has already built over 2,500 homes, sheltering nearly 10,000 persons.

“We believe that even though you are poor, you have the right to own a home like everyone else here in this country and we provided that opportunity by creating the National Housing Corporation,” said Dr. Douglas.

He informed them that construction of another 500 homes has begun. “There is more to come. We will make sure that every single one of you has the opportunity to own a home in St. Kitts and Nevis,” said Prime Minister Douglas.

Dr. Douglas informed the workers, that the diversification of the St. Kitts and Nevis economy began in the late 1960’s with the establishment of the industrial estate at Ponds Pasture, under the Labour Administration of the late Premier and First National Hero, the Right Excellent Sir Robert L. Bradshaw and its expansion continued under his own Labour Administration.

“This industrial estate was created by a Labour Administration of the past and has been expanded by a Labour Government of the present and it will continue to expand to ensure that there are opportunities for our young ladies and young men to be employed in the future by ensuring that there is continued employment for the people of this country despite the global financial and economic challenges that we face,” said Prime Minister Douglas.

Minister of Finance, International Trade, Industry and Consumer Affiars, Dr. the Hon. Timothy Harris reminded the workers that the Labour Government last November increased the minimum wage from EC$250.00 to EC$320 per week – the highest in the Organisation of Eastern Caribbean States (OECS).

When the St. Kitts-Nevis Labour Party took office in 1995, the minimum wage implemented by the previous PAM administration in 1994, was EC$100 per week for domestic workers and EC$120 dollars per week for shop supervisors.