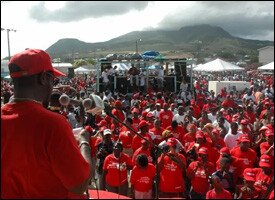 Prime Minister Douglas will also attend two public meetings and the opening of a marine facility and a new medical school on the weekend.

Dr. Douglas and his Ministers along with leading officers of the St. Kitts-Nevis Trades and Labour Union will begin Labour Day on Monday, laying wreaths on the graves of past Labour Movement stalwarts including National Heroes, Their Right Excellencies, Sir Robert L. Bradshaw, Sir C.A. Paul Southwell and Sir Joseph N. France. Wreaths will also be laid on the graves of the late Sir Lee Llewellyn Moore, the late Fitzroy Bryant, the late E. St. John Payne and the late Fidel O’Flaherty. Family members and the leadership of the St. Kitts-Nevis Trades and Labour Union and the St. Kitts-Nevis Labour Party will participate.

Following the wreath laying ceremony, workers led by the leaders of the Labour Movement will march from the Patsy Allers Playing Field through the streets of Basseterre before returning at that Playing Field for a Grand Picnic.

Prime Minister’s agenda on Friday include viewing the mini motorcade of the 8 contestants participating in the traditional Miss Labour Queen Show. The mini-motorcade begins at the Patsy Allers Playing Field and will wend its way into Basseterre via Cayon Street, Central Street, Church Street, the New Town Bay Road, George Street, the Circus and culminating at the Bus and Ferry Terminal where a public meeting will be held and at which Dr. Douglas is expected to speak.

Prime Minister Douglas will also participate in the official opening of the St. Kitts Marine Works Haul Out Facility at New Guinea on Friday afternoon.

On Saturday afternoon, he delivers an address at the official opening of Burnett International University, a new medical school at Bird Rock before attending the annual Miss Labour Queen Show, where he and his Deputy Prime Minister Hon. Sam Condor will participate in the coronation of the new Miss Labour 2009 at Carnival City.

On Sunday 3rd May at 8:00 P.M, Prime Minister Douglas and Ministers of Government will address nationals at a Public Meeting at George Street, New Town. Dr. Douglas and his colleagues are expected to bring nationals up to date on important political, economic and social developments in the twin-island Federation including labour, tourism, health, education, public utilities, social development programmes, sports, crime and national security.

On Monday 4th May, workers in St. Kitts and Nevis will join the rest of the Caribbean and the World in celebrating the Annual Labour Day.