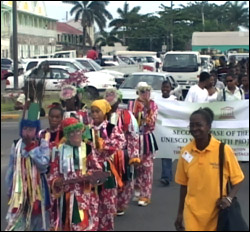 Youth Month in Nevis culminated Wednesday April 25, 2008 with a grand finale rally that climaxed at the Nevis Cultural Center. The event was organised in collaboration with the newly launched Peer Unit of the Youth Division and included entertainment from various youth groups and individuals.

On hand at the event was Minister responsible for Youth and Social Development in the Nevis Island Administration (NIA) Hon. Hensley Daniel, who urged the youths of Nevis to abstain from promiscuous and anti-social behaviour, read avidly, make informed healthy choices and to set good examples for other youths, who did not experience the impact of the rally.

Mr. Daniel said the young people of Nevis represented the island’s greatest hope, opportunities and greatest challenges. The government he said was focused on the positive to help them stay on course.

“With regards to the inclusion of the decision making process, we do not share the view that young people are the men and women of tomorrow but we say they are the men and women of today. Since we came to government in 2006, there is a young person on the Board of every Public Corporation in Nevis and that young person is given the same responsibility and the same amount of authority as the Board’s older adults,” Mr. Daniel said.

The Social Transformation Minister reflected on the theme for youth month which conveyed to the island’s young people to create a safe environment through informed and healthy choices.

He explained to them about their vulnerability with regards to HIV/AIDS and its financial impact on government.

“I believe I should tell you also about the situation with HIV/AIDS and to say very quickly to you the information that I have from the Unit showed that last year in Nevis five persons were tested positive for HIV/AIDS and we are treating 13 persons with anti retro viral drugs, which cost about $4,000 to treat a patient on a monthly basis.

“In helping us to deal with these challenges, is to borrow a phrase from the law profession which says that “˜you are innocent until proven guilty.’ I want all the young people in Nevis in dealing with HIV/AIDS, to assume that everybody is positive until proven negative,” Mr. Daniel said.

In addressing the HIV/AIDS pandemic the Youth Minister advised the youths to keep the single most important issue of abstinence on their agenda, as the safest method to ensure that they did not contract the disease. He further told them not to subscribe to the belief that abstinence did not work.

Mr. Daniel also requested for them to make healthy choices with regards to their health and made reference to the Dental Unit and the Statistical Unit in the Ministry of Health, which revealed that young people were eating an excessive amount of confectionery, which resulted in the increase of tooth decay among children. They were instructed to reduce their sweet consumption, which would minimized the problem.

The Youth Minister also referred to the financial burden on government, which was attributed to violence and anti-social behaviors prevalent among young people.

“I must share with you the cost to us [NIA] the issue of violence and anti social behaviour. Every time somebody is shot in Nevis and we care for them for one week before we remove the bullet, it cost us [NIA] somewhere in the region of $17 – $20,000 dollars for each week that person spends in the hospital. While you go to school or interact in the community bear in mind the cost of violence,” he said.

He recognised the newly formed HOPE Nevis youth organisation, for their assertiveness in the community and hoped for a peer group to be involved in every parish on the island, where positive young people would counsel their peers.

He commended the efforts of the Youth Division for making Youth Month a success and also admonished the young men and women to prescribe to good values despite their challenges. The other major activity held in observance of Youth Month was the Division’s Easter Camp, which attracted 105 campers.

The Iron Band from Rawlins village and the Pathfinders Marching Band provided music for the rally. Permanent Secretary in the Department of Social Transformation Mr. Halstead Pemberton and Director of Social Services Ms. Sandra Maynard also attended the event.

The three awardees recognised for their contribution to the development of young people were Ms. Dian Hobson, Mr. Marvin Hanley and Mr. Ron Daniel.

Commonwealth Youth Ambassador Alternate for St Kitts and Nevis Mr. Anselm Caines spoke on behalf of his fellow Nevisian youths, and conveyed their concerns to the government.

Youth Coordinator in the Youth Division Ms. Claudia Walwyn gave an overview of the newly formed Peer Unit, which is comprised of 15 students from the two public high schools, Charlestown Secondary and Gingerland Secondary.

She said the Peer Counselors would receive extensive training and would be given the responsibility to make the initial contact with other peers who needed to talk about their problems and concerns in a comfortable and relaxed atmosphere, as they liaised with the Youth Ministry. She also said they were responsible for recruiting Nevis’ youths to events consistent with youth activities.

Ms. Walwyn congratulated the Peer Unit for recruiting the various groups and individuals that participated in the rally and for having encouraged the huge gathering of young people to attend the closing ceremony that officially marked the end of Youth Month 2008.