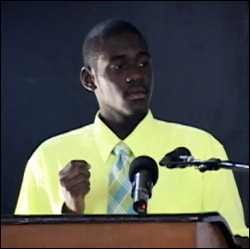 Commonwealth Youth Ambassador Alternate for St Kitts – Nevis Mr. Anselm Caines decried the stereotyping of young people which he said denied them of their individuality and prevented them from reaching their full potential. Mr. Caines made the statement while he delivered the feature address at the closing ceremony to mark the end of youth month 2008 at a recent rally.

“We have to dump the stereotyping of young people which denies them their individuality and prevents us from seeing their potential for greater things. Moreover, there are times that we have to be prepared to accept that our experience however great, it is does not necessarily make us qualified or determined their course of development. So often I hear the older adults speak about how it was in their time and how this young generation is going,” Mr. Caines said.

Mr. Caines at the time represented youths on Nevis and spoke on the topic of Youth Development to government and non government leaders of Nevis. He called on them to recognise the fundamental flaws in matters related to youths.

He said the many problems surrounding youths were debated as a youth problem, which implied something was fundamentally wrong with young people. He admitted that while there were exceptions, the energy and enthusiasm of young people were misinterpreted.

He further added that the youths of this era continued to experience rapid changes unlike previous generations which had contributed to the difficulties young people have encountered.

“Peer pressure has manifested itself in so many forms. Young people today face a difficult society and many of the influences that were not so evident in days gone, by have evolved into giants, threatening to stomp and swallow our youths.  There are many problems facing our youths and yes, our young people do indeed give their fair share of problems. There is no denying on either side of the spectrum. However,
we must confront these challenges head on.

“It is certainly clear that the new challenges facing youth development require new thinking innovation and creativity.  If we are to significantly impact the lives of our young people we have to throw away the old tired perspective on youths,” he said.

He said that while young people should be willing to learn from past mistakes of others, the adult community should accept that life has changed and the sovereignty of the life experiences of today’s youths are to be embraced and accepted, as the only firm basis on which to plan.

He also charged his peers to realize that just as they had rights, they also had responsibilities, not only to themselves but to their community and to their country. He told them despite the implementation of projects and programmes geared at youth development, they would achieve minimal if they failed to take advantage of the opportunities provided by their government.

The Youth Ambassador reiterated for his peers to create a better environment for themselves through good decision making and to agitate and demand better from their parents, government and their peers.

He also asked them to be passionate about having a greater need to be included in the decision making process, to have their voices heard and their opinions included in the policies of the country.

“Young people living in a country where they are constantly ridiculed for their activity and division, must also be able to say to the politicians on both sides of the political divide that they must set examples for us by refraining from engaging in the petty partisan politics that so often perpetuates division in our country and in that regard, we must emphatically say that better must come.

“Better must come from all of us as stake holders in youth development, if we are to create an environment of peace and prosperity for our young people. I must admit that recently there has been a rejuvenation of sorts in terms of youth participation in wholesome activities that can only contribute to the development of our youth. We see the advent of youth groups such as HOPE Nevis, the Iron Bands and now we have coming on scene the Shekinah Dance Theatre.

“It is groups such as these that can truly make a difference as they seem to actively involve our young people with their diverse talents into something meaningful and something positive. However, there is still work to be done we must continue to build on the strengths of our youths rather than to be fully focus on the social ills that are associated with their presence amongst us. The family must continue to give its unyielding support to its children if they are to succeed. They must ensure that the morals and the values that has helped to shape many of them into what they are today, are to be embedded and intertwined into the civic consciousness of our people,” said Mr. Caines

He also said society’s failure to minimise the youth problem would be an indictment on society.

He urged policy makers of the country to continue the development of their programmes on the basis of having consultation with young people, in order to ensure democracy prevailed. He added that the youths deserved being heard.

“I urge the policy makers of this country to continue the development of their programmes on the basis of consultation with our young people in an effort to fully ensure participatory democracy. Regardless of whether or not we’re a part of educational institutions, the media, private sector the government or the family, we all have an integral role to play in the development of our young people.

“We are all stakeholders in youth development, let us ensure that we continue to create a safe environment so that our youths are equipped with the tools necessary to make informed and healthy choices for themselves,” he said.